IN HIS OWN WORDS: 20 Quotes by Barack Obama on Islam

The media exploded yesterday in "outrage" at Donald Trump's failure to correct a town hall questioner who accused Barack Obama of being a Muslim. 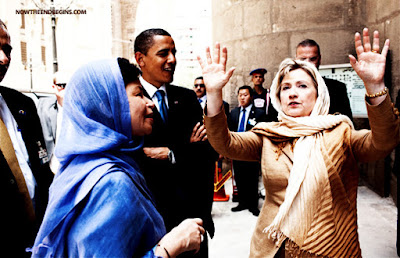 It's worth highlighting the hypocrisy of the media. After all, it was Hillary Clinton -- during the 2008 Democrat primary campaign -- who first raised suspicions that Obama was likely a crypto-Muslim.

Oh, and it wasn't Donald Trump who uttered the following public statements regarding Islam. It was Barack Obama:

3 “We will convey our deep appreciation for the Islamic faith, which has done so much over the centuries to shape the world — including in my own country.”

4 “As a student of history, I also know civilization’s debt to Islam.”

5 “Islam has a proud tradition of tolerance.”

6 “Islam has always been part of America”

7 “We will encourage more Americans to study in Muslim communities”

8 “These rituals remind us of the principles that we hold in common, and Islam’s role in advancing justice, progress, tolerance, and the dignity of all human beings.”

9 “America and Islam are not exclusive and need not be in competition. Instead, they overlap, and share common principles of justice and progress, tolerance and the dignity of all human beings.”

11 “Islam is not part of the problem in combating violent extremism – it is an important part of promoting peace.”

13 “In ancient times and in our times, Muslim communities have been at the forefront of innovation and education.”

14 “Throughout history, Islam has demonstrated through words and deeds the possibilities of religious tolerance and racial equality.”

16 “The Holy Koran tells us, ‘O mankind! We have created you male and a female; and we have made you into nations and tribes so that you may know one another.’”

17 “I look forward to hosting an Iftar dinner celebrating Ramadan here at the White House later this week, and wish you a blessed month.”

18 “We’ve seen those results in generations of Muslim immigrants – farmers and factory workers, helping to lay the railroads and build our cities, the Muslim innovators who helped build some of our highest skyscrapers and who helped unlock the secrets of our universe.”

19 “That experience guides my conviction that partnership between America and Islam must be based on what Islam is, not what it isn’t. And I consider it part of my responsibility as president of the United States to fight against negative stereotypes of Islam wherever they appear.”

20 “I also know that Islam has always been a part of America’s story.”

“Islam has a proud tradition of tolerance"? Comedy gold, my friends, comedy gold.

Obama lies that he's a Christian - look at the video of Barack Obama debating Alan Keyes :

The key sentence is found at :30 in. Obama would ask Jesus if he was "going up or down".

Every true Christian has already given their life to Christ, and knows without a doubt that their salvation rests entirely in Him. So asking such a question of Christ is a very strong indication Obama don't really known Jesus as Lord and Savior. In fact, the more damning evidence comes right before that in his statement "If I met Jesus...."

That indicates he hasn't met Him yet. (But he will!)

I'd like to hear Obama perfectly recite the Shahada in Arabic.
Or explain the Arabic script on his "wedding" ring.

The list might well include:
Muslims invented the clock.
NASA is learning from Muslims about space.
Muslims really don't beat their wives, or lie to infidels.
Muslims are members of the most legalistic religion on the planet.
Muslims like little girls but when one is not available, a little boy will do.
Muslims think homosexuals can fly.
One go on, but suffice it to say there is much good they could learn from our culture if they realized they will never subvert it.

OBAMA' ACTIONS SAYS IT ALL. THIS QUESTIONS HAS BEEN PONDERING FOR A VERY LONG TIME. OBAMA WILL NOT TRY TO CLEAR ANY ACCUSATIONS BY RELEASING ANY RECORDS. EVEN DONALD TRUMP WOULD DONTATE A 5 MILLION TO HIS CHARITY OF OBAMA'S CHOOSING IF HE RELEASES HIS RECORDS. YOU HAVE TO WONDER WHAT IS OBAMA'S PROBLEM THAT HE DID NOT WANT TO DO THIS?

I AM VERY SURPRISED OF HIS SUPPORTERS BECAUSE THEY ARE TAKING HIS WORD WHEN THERE IS NO CLEAR EVIDENCE HE IS A PRACTICING CHRISTIAN.

OBAMA SURE LIES ALOT AND HAS BEEN CAUGHT SO WHY DOES HE STILL HAVE SUPPORTERS? I JUST DONT GET IT UNLESS THEY ARE ALIENS AND OR THEY ARE MUSLIMS THEMSELVES KNOWING THEY ARE THERE FOR A PURPOSE OR SOME AMERICANS ARE PLAINLY IGNORANT AND IS TAKEN IN BY HIS CHARM AND LIES. THANK GOD DONALD TRUMP HAS COME ALONG. HE IS NOT A PUPPET LIKE THE REST OF THE SENATE AND THAT IS WHY WE SHOULD SUPPORT HIM IN HIS QUEST TO GET RID OF THE TRAITOR IN THE OVAL OFFICE ALONG WITH HIS PATHETIC PREJUDICED GAY LOVER MICHAEL.