Hillary Clinton appeared today on Meet the Press and her performance was just as disingenuous and as evasive as you might have predicted. 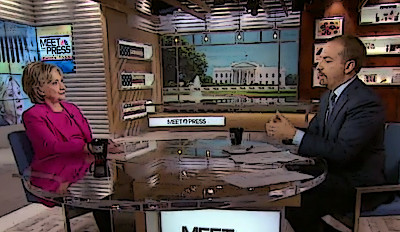 Chuck Todd introduced Hillary Clinton with the collaborative and sympathetic disclaimer that "there's always conspiracy theories out there... you know?" as if active FBI investigations into the former Secretary of State's activities are conspiracy theories.

Todd began his questions with a clip from Clinton's appearance on Meet The Press is 2008, when she asserted her support for transparency and open government.

I want to have a much more transparent government. And I think we now have the tools to make that happen. I want to have as much information about the way our government operates on the internet. So the people who pay for it, the taxpayers of America can see that.

Pretend that all of her emails were sent to .gov addresses, absolving her of blame

Clinton, in what appeared to have been a well-rehearsed, yet wholly inadequate answer, asserted that her official emails were all destined for ".gov" addresses, which meant that they would have been archived in government systems.

Of course that's a naked lie:

(b) Hillary's emails that were exchanged with foreign governments and private entities (e.g., those dealing with various quid pro quo arrangements with the Clinton Global Initiative) would have disappeared into the ether unavailable to FOIA or Congressional oversight requests.

(b) To perform a complete and effective discovery of Hillary's responsive emails within government, virtually every agency would have to be contacted and queried; a task made all the more difficult since the government itself has no idea how many federal agencies actually exist.

Todd briefly mentioned Clinton's private email server -- an unprecedented attempt to circumvent scrutiny -- but did not pursue that line of questioning.

Instead he followed up with this week's disclosure that -- contrary to her statement under oath that she had turned over all official communications -- records had been discovered in which she conducted conversations with General David Petraeus.

It was my lawyers' fault

Hillary responded once again with the ".gov" lie, stating that the reason the new emails had been found because of her diligence in communicating using Petraeus' government email address. She also tossed her attorneys under the bus, stating that they had supervised the whole process, implying any omissions were their fault.

I'm just a woman: how could I possibly know about computers?

Todd asked about the highly unusual step of setting up her own email server; Clinton responded that it was just a server that was already laying around in her house, in fact "it was just sitting in the basement."

I can't control the technical aspects of it. I'm not by any means a technical expert. I relied on people who were.

In fact, she relied on one person -- Bryan Pagliano -- who took the Fifth Amendment when Congressional oversight loomed, simply refusing to answer any questions regarding the server.

And we have done everything we could in response to the State Department asking us to do this review because they asked all the former secretaries.

Obviously, "everything we could do" did not include asking Pagliano to answer all of the questions.

Oh, and of course Clinton once again turned the question back to the "my assumption was anything that I sent to a .gov account would be captured" lie.

I couldn't send everything to the State Department

In a thoroughly bizarre exchange, Clinton then denied the existence of the "cc:" feature of email.

When Todd noted that she could have copied all of her exchanged to her ".gov" account, Hillary responded:

Well, but when you communicate with people in other parts of the government, you're not sending it to TheStateDepartment.gov. And that would've been true either way. Look, I think I have done all that I can to, you know, take responsibility, to be as transparent as possible in turning over 55,000 pages, in turning over my server, and to, you know, testify on October 22nd, which I've been asking to do before the Congress.

The State Department couldn't keep their records straight, how could I?

Todd then pursued the rationale for the State Department requesting the last four SECSTATES provide details on their recordkeeping, which occurred in 2014. The impetus, Todd noted, was that discrepencies had been found in Hillary's emails.

When the committee, the I think eighth or ninth committee, investigating Benghazi asked for information from the State Department, you know, they were doing a survey. And they found discrepancies in their recordkeeping. Not in my records, per se, but in their overall recordkeeping. There were gaps. And that's why they sent the letter.

This witch hunt against me has been going on since the nineties!

Noting that one explanation for running a private email server would be to "make it a little more difficult for congressional investigators to subpoena your government emails and a little more difficult for Freedom of Information Act requests", Hillary ridiculed the "conspiracy theory" and positioned the entire investigation (including that of the FBI) as a vast right wing conspiracy.

Now I have, as you're rightly pointing out, been involved from the receiving side in a lot of these accusations. In fact, as you might remember during the '90s, there were a bunch of them. And, you know, all of them turned out to be not true ... And it is, you know, it's regrettable, but it's part of the system.

Finally, Todd noted the ever-evolving set of assertions, new disclosures refuting those assertions, then walk-backs, footnotes and addenda by the Clinton campaign. Todd asked, "Can you reassure Democrats that there's nothing else here?"

NO, I CAN'T ASSURE DEMOCRATS NOTHING ELSE IS THERE

Instead of flatly assuring the American people that no other lies will be exposed (because, of course they will), Clinton responded:

I can't predict to you what the Republicans will come up with, what kind of, you know, charges or claims they might make. I have no control over that. I can only do the best I can to try to respond. The Justice Department has the emails, they have the server, they're conducting a security inquiry. They will take whatever necessary steps are required to get this matter resolved.

The "Republicans will come up with"? As opposed to the FBI and various federal courts processing Freedom of Information Act (FOIA) requests?

Todd repeated the question, "Can you say with 100% certainty that the deleted emails that the F.B.I.'s not going to find anything in there that's going to cause you to have to explain again?"

She responded that her attorneys -- if additional Clinton lies are discovered -- are to blame.

"I didn't look at them," she said, because "I didn't want to be looking over their shoulder."

Because the Clintons always allow others to micro-manage their image.

Hillary also stated flatly that no emails from her to the Clinton charity would be discovered because she "did not communicate with the foundation."

Let me just predict here and now: within a couple of months time, she'll have to adjust that statement as well.

Let me say once again: Hillary Clinton should suspend her campaign immediately until these emails have all been released.

I am Mariam used every single spell worker on the internet, spent untold amounts of money and discovered they are all fakes...i was the fool though; doing the same thing over and over again and expecting different results. In the end, I decided that I wanted a tarot reading to know what my future held for me; I contacted a woman who lives locally to me and she told me about a man named (priests olalude abija); he does not advertise on the internet, has another job for income, has no set prices, makes no false promises and refuses to help anyone that cannot be helped and even helps for free sometimes, he will give you proof before taking money. He is a wonderful man and he was the only person who actually gave me real results. I really hope he doesn't mind me advertising his contact on the internet but I'm sure any help/ extra work will benefit him.contact him as spirituallighthealing101@live.com He travel sometimes.love marriage,finance, job promotion ,lottery Voodoo,poker voodoo,gambling voodoo,golf Voodoo,Law & Court case Spells,money voodoo,weigh loss voodoo,any sicknesses voodoo,cancer voodoo,Trouble in marriage,it's all he does Hope this helps everyone that is in a desperate situation as I once was; I know how it feels to hold onto something and never have a chance to move on because of the false promises and then to feel trapped in wanting something
more.