As if the President Obama’s sweeping amnesty measures haven’t compromised national security enough, the administration let 1,519 “inadmissible” foreigners embroiled in terrorism into the U.S. last year because the crimes were committed “while under duress.” 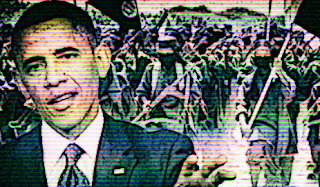 Before the Obama administration tweaked a federal law last year, these foreign nationals would have been banned from the country for supporting terrorist causes. But under the changes the Secretary of Homeland Security has “discretionary authority” to waive certain grounds of inadmissibility relating to terrorism. We’ve seen this discretionary authority abused in the last few years and in fact, the administration has eliminated a zero tolerance policy for granting asylum or residency to individuals who have provided any sort of terrorism-related support.

The government’s latest available figures for granting asylum or residency to individuals embroiled in terrorist causes are incredibly disturbing, especially since the agency charged with keeping the nation safe, the Department of Homeland Security (DHS), appears to downplay the seriousness of the crimes.

Judicial Watch obtained the numbers from the United States Citizenship and Immigration Services (USCIS) annual report to Congress on the DHS secretary’s application of discretionary authority.

The biggest chunk of exemptions was processed for refugee applicants and lawful permanent resident status, with 806 and 614 respectively. The rest were processed under other DHS programs such as Temporary Protected Status (TPS), asylum and relief through a Justice Department initiative. The bottom line is that the U.S. government is allowing them all to stay in the country with rights and benefits afforded to legal residents despite their terrorist connections and associations.

This effort was officially launched last year when the administration quietly changed the Immigration and Nationality Act (INS), implemented decades ago to govern immigration and citizenship in the United States. The law includes a ban on admitting refugees and asylum seekers who may have provided terrorists with any sort of material support, even the kind that may be considered trivial by some. In other words, the federal law rightfully had a zero tolerance for any kind of involvement with terrorist elements. But a joint effort by DHS and the State Department created an “Exercise of Authority” that allows “an alien who provided limited material support” to a terrorist organization to stay in the U.S. if the powers that be in our government believe they pose no threat.

The administration seems to have a soft spot for terrorists. A few months after the INS change was exposed, a frustrated U.S. senator revealed that the administration appears to have a terrorist “hands off” list that permits individuals with extremist ties to enter the country. The lawmaker obtained the information from internal DHS documents that include communication between U.S. Immigration and Customs Enforcement (ICE) and U.S. Customs and Border Protection (CBP) asking whether to admit an individual with ties to various terrorist groups. The suspect had scheduled an upcoming flight into the U.S. and was believed to be a member of the Muslim Brotherhood and a close associate and supporter Hamas, Hezbollah, and the Palestinian Islamic Jihad.

You can support the important work of Judicial Watch by clicking here.