Hillary Clinton's Friday night announcement of Sen. Tim Kaine of Virginia as her vice-presidential running mate stirred immediate disappointment and outrage among the progressive wing of her party and the army of supporters inspired by Bernie Sanders' historic and visionary campaign.

"I'm thrilled to tell you," Clinton texted those on her mailing list just before 8:15 PM EDT on Friday evening: "I've chosen Sen. Tim Kaine as my running mate."

"Secretary Clinton must know that her choice of Kaine can only inflame rather than soothe her relations with the huge constituency of Bernie supporters." —Norman Solomon, RootsAction.orgReporting in recent days increasingly signaled that Kaine was Clinton's top choice, but the official announcement confirmed the worst fears of progressives who warned such a pick would be taken as "a pronounced middle finger" to the millions who voted for Sanders during the primary season. At stake, many critics of the choice indicate, are pressing issues—including reproductive rights, climate change, financial regulation, and corporate-friendly trade agreements—where Kaine holds positions far to the right of where they think the party, and the country, should be headed. 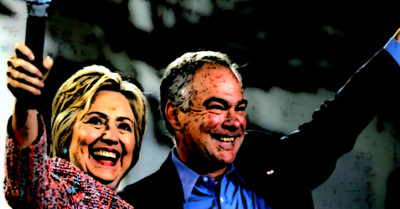 Instead of courting the energized progressive base activated and inspired by Sanders, Clinton's choice was interpreted as a calculated affront to those potential voters.

"Secretary Clinton must know that her choice of Kaine can only inflame rather than soothe her relations with the huge constituency of Bernie supporters," Norman Solomon, co-founder of the online advocacy group RootsAction.org and national coordinator for the Bernie Delegates Network, told Common Dreams in response to the news.

Such voters, he continued, "will understand what it means when their efforts to challenge oligarchy have been met by Clinton's selection of a loyal servant of oligarchy. If Clinton has reached out to Bernie supporters, it appears that she has done so to stick triangulating thumbs in their eyes."

Deborah Burger, co-president of National Nurses United, which had endorsed Sanders, indicated the decision would be deeply troubling for her members and most progressives.

"Hillary Clinton could have sent a strong signal to the millions of people who voted for moving beyond decades of neo-liberal policies that have produced massive inequality in wealth, employment, health care, and education, as well as racial and gender disparities and an escalating climate crisis," Burger told Common Dreams in a statement. "Selecting Tim Kaine sends the opposite message, continue to accept the status quo and lower your expectations for real change or a future we can believe in."

"It's just a sign that Hillary does not feel like she has to do anything for the progressive wing of the party." —Ruth Conniff, The ProgressiveAccording to Ruth Conniff, editor-in-chief of The Progressive magazine speaking to MSNBC's Chris Hayes when the news broke on Friday, the choice of Kaine will do nothing to excite people who voted for Bernie Sanders.

"It's just a sign that Hillary does not feel like she has to do anything for the progressive wing of the party," lamented Conniff. "And that's unfortunate."

In the last week alone, Kaine is on the record as pushing for new rounds of Wall Street deregulation and voicing active support for the Trans-Pacific Partnership (TPP) trade agreement—both in direct contradiction to what grassroots progressives have been demanding.

"This is not a move of any kind towards the left," Conniff continued. Though its true that this choice feels comfortable to the Clinton campaign and those in Washington, D.C., she continued, "There are all these voters out there and you have to energize them and this is not an energizing pick."

As Jodi Jacobson, writing for the reproductive rights blog Re-Wire, warned ahead of the official announcement, "The selection of Tim Kaine as vice president would be the first signal that Hillary Clinton intends to seek progressive votes but ignore progressive values and goals." The decision, she warned, would be "likely at her peril, and ours."

"First signal that Hillary Clinton intends to seek progressive votes but ignore progressive values and goals." —Jodi Jacobson, ReWireThat argument was echoed by Stephanie Taylor, a co-founder of the Progressive Change Campaign Committee, who told the New York Times that a pick like Kaine will be seen by many progressive and independent voters "as a proxy for how she will govern — boldly, or cautiously?" Referring to the historic number of small-dollar donors who fueled Sanders’ campaign, Taylor warned the choice "could deflate energy among potential donors and volunteers, hurting Democratic efforts to win the White House."

Immediately following Clinton's official announcement, Taylor said Kaine's support for TPP falls woefully short of what most progressive would have hoped for on the ticket.

"As we saw in Donald Trump’s speech last night, Republicans will run hard against Democrats on trade this year," Taylor declared. "Unfortunately, since Tim Kaine voted to fast track the Trans-Pacific Partnership, Republicans now have a new opening to attack Democrats on this economic populist issue."

What a Clinton/Kaine ticket makes clear, according to Jacobson, is that progressives now have a serious "fight on their hands, not only to avoid the election of an unapologetic fascist, but to ensure that the only person claiming the progressive mantle actually means what she says."

"Kaine, like Clinton herself, is a quintessential 'New Democrat'—meaning they are allies of Wall Street. They embrace a neoliberal, pro-corporate outlook that has done incredible damage to the vast majority of Americans." —economist William K. BlackBy picking Kaine, Black said in a statement, the presuptive Democratic nominee has revealed her preferences when it comes to the financial industry and the economy at large.

"It's not what you say, it's what you do," said Black. "Clinton can talk about caring about the U.S. public, but this choice cuts through the rhetoric. Kaine, like Clinton herself, is a quintessential 'New Democrat'—meaning they are allies of Wall Street. They embrace a neoliberal, pro-corporate outlook that has done incredible damage to the vast majority of Americans."

Specifically on the issues of climate change and fossil fuels, director of the advocacy group 350 Action May Boeve also agreed the choice was troubling.

"Tim Kaine won’t energize the climate base, so it’s up to Hillary to start staking out some clearer positions," Boeve said in a statement. "Kaine was with us on Keystone XL, but against us on offshore drilling and fracking. This November, climate activists, young people, and progressives will turn up at the polls for candidates who say the magic words, 'keep it in the ground.' If Democrats want to drive turnout, it’s time to come out more clearly against drilling, fracking, and new fossil fuel infrastructure."

Though a few pundits in recent weeks attempted to make a "progressive case" for Kaine, those arguments largely fall flat for independent-minded progressives and voters committed to the transformative agenda put forth by Sanders.

Jeff Cohen, co-founder of RootsAction.org and communications coordinator of the Bernie Delegates Network, said Clinton's choice repeats mistakes of other presidential candidates who misread, or ignored, the political mood of the nation's electorate.

"Clinton has apparently learned little from the horrific history of 2000, when many progressives had publicly expressed their disapproval of the Democratic presidential candidate, Al Gore – with many rallying to Ralph Nader’s 3rd party bid," explained Cohen. "Gore basically said 'F you' to those voters by choosing a running-mate even more corporate and hawkish than himself: the dreaded Sen. Joe Lieberman of Connecticut. It ended with Bush in the White House."

By choosing a "corporatist like Kaine," Cohen continued, "Hillary has 'pulled a Lieberman.' God forbid if it puts Trump in the White House."

Reactions among progressives on social media were equally unforgiving and filled with warnings about what the decision portends:

Hillary Clinton has chosen Tim Kaine, who headline writers refer to as "a Democrat Wall Street can like," as her running mate.

Clinton/Kaine: Because triangulation was so great for Dems the first time around

Hillary Clinton’s VP pick has split with labor on the TPP, banking regulation and even “right-to-work” laws.https://t.co/ALIz2owMlD

Don't think people are really grasping how plausible it is that Trump could become president. It's a close election right now.

Hillary inflamed her own brain with that seizure after choosing this son of Belial for a VP.
Hey Hillary, how is that going with your "Greedy Doctor"? I'd bet you'd pay a whole lot more if he'd prescribe the right meds for your problem.
Or maybe ObamaCare is your problem eh? If it's good enough for us, it's head swinging enough for you.