Just as Hillary proved that laws are for the little people and that guns should be reserved only to protect Democrat elites, it turns out that security walls are also for your betters.


To the Democratic National Committee elites, keeping average Americans away from their convention is a good idea, while protecting the southern border from intruding terrorists, rapists and murderers is a bad one. 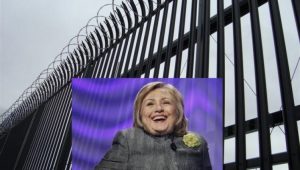 The DNC has erected a four-mile fence around its convention site at Philadelphia’s Wells Fargo Center. (Isn’t it ironic they’re doing so much to protect a site named after a bank?)

The Democrat Party: the "D" stands for "Double Standards".

I have it on good authority that the fence, topped with razor wire, is designed to keep Debbie Wasserman Schultz out and all the Bernie supporters in!

If we had built a wall _on_ our border, we wouldn't need walls _inside_ our borders.