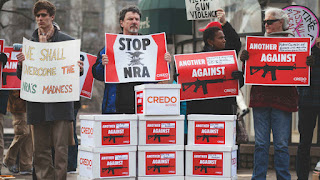 After the news that eleven Dallas officers were shot and five killed, many have pointed fingers at the rhetoric of the Black Lives Matter movement and at politicians for refusing to draw the proper conclusions. The concern that the police, while protecting the rights of BLM rally-goers, were picked off by a gunman, who clearly stated he wanted to kill white cops, has regular Americans partially paralyzed about what can be done about the crisis.

It’s clear the radicals who seek social change do not care at all about justice, since all of the killed officers were individuals who had nothing to do with any incidents portrayed by BLM as racially motivated killings. But because of the mental sickness that focuses on uniform and skin color, every white cop is in an extremely dangerous position.

So it would be helpful if people started taking rhetoric about murdering people with guns pretty seriously. Law-abiding gun owners don’t go out and buy a gun to murder people, nor do they share plans to do so on social media in order to create “social change.”

Case in point: James Pearce. The FBI is now investigating Professor Pearce’s Facebook post from the middle of June that called for killing everyone at the NRA headquarters. Pearce is an adjunct professor of Southern State Community College in Ohio, and was referred to the FBI and Loretta Lynch told the college head to take no action until the federal government concluded their investigation.

Reports say that a former student alerted local law enforcement of this post and the matter made it to the FBI and Homeland Security.

So let’s look at Pearce’s comments and see if what he is now saying, that it was all just a funny sarcastic joke, and that people need to loosen up and stop being so divided, is true. First of all, the day of the posting, June 13th, the news cycle was saturated with the news of the Orlando terrorist massacre, and the day before, Obama issued a statement about the massacre and included this dog whistle in his remarks.

"The shooter was apparently armed with a handgun and a powerful assault rifle," Obama said. "This massacre is therefore a further reminder of how easy it is for someone to get their hands on a weapon that lets them shoot people in a school, or in a house of worship, or a movie theater, or in a nightclub.  And we have to decide if that’s the kind of country we want to be. And to actively do nothing is a decision as well."

So a comment like this from a professor right after Obama makes the attack about gun control doesn’t sound like a joke. Pearce also seems to be hiding behind “art” as he insists that he was just making “poetry.” He often writes poetry on his Facebook account, and earlier this week drafted a poem complaining that as an American, he should be able to say what he wishes and that he is actually a brave man.

So let’s talk about what would happen to our brave professor if he approached the NRA headquarters with a bunch of armed “anti-gun types” in Fairfax, Virginia.

He’d get shot, and maybe learn a lesson.

The NRA headquarters is staffed by very well trained gun experts, and Virginia is a concealed carry state. Anti-gun types armed with guns they are extremely afraid of using would be pretty easy sitting ducks for those defending themselves. If the Orlando night club held some people with the expert training the folks at the NRA headquarters have, any gunman who showed up to the nightclub and opened fire, would expect to die that night.

Even though the professor laughs it off now asserting that only those with low IQ’s could possibly have thought it serious, his post is no small thing because of the times we live in and the dangerous leadership this nation has. Intentionally taking the focus off of lawbreakers and instead hyping hatred has not and will not stop bad people from killing. In fact, it’s creating a mentality that having a gun is a license to kill, rather than a weapon for self-defense against the crazies like the Dallas shooter. Yet the professor’s commentary holds distinctly murderous rhetoric, and what is most despicable, is that his purpose is to make guns illegal through using them illegally, no matter what the human cost.

It may very well happen that Mr. Pearce suffers no consequences for his incitement, but law-abiding gun owners in the area where he lives ought to encourage the college to remove him from their community classrooms. Someone so flippant about killing people for political gain ought to be watched very carefully.

I ask every Anti-Gun useless idiot type I speak with : "After we give up our 2nd Amendment Right(s) Which Rights will you have us surrender next? If I'm to give up any right at all, It'll be the right to murder unborn children." That usually does the trick.