The Atrocity Known as Moral Equivalence

We have reached the point where moral equivalence has become a moral atrocity. The smart set in the West has insisted, for over a generation, that Israel and the Palestinians are morally equal. There are extremists, on both sides, they say. Both sides are responsible for the absence of peace.

The first serious outcry against this lie came immediately after the Palestinians began there terror war against Israel in September 2000.

That war, incited, directed, funded, commanded and celebrated by Yassir Arafat and his henchmen, including his successor Mahmoud Abbas, began two months after Arafat overturned the table at Camp David in response to then prime minister Ehud Barak's offer to withdraw from 95 percent of Judea and Samaria, all of Gaza and half of Jerusalem to enable the establishment of an independent state of Palestine in the areas.

The areas in question, Barak said, would be handed over to the PLO Jew free. The hundreds of thousands of Jews living in the areas set to become Palestine, would be forcefully evicted from their homes to ensure that the delicate, sensitive Palestinians, wouldn't be troubled by the Jews with their "dirty feet," in the words of Abbas. 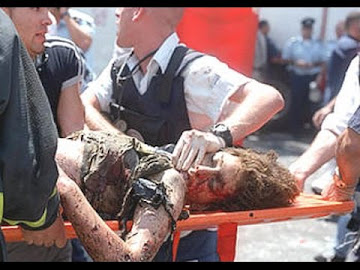 That, of course, wasn't enough for Arafat. And it was insufficient not because Barak failed to give him what he demanded. It was insufficient because his demands were insatiable. Arafat was never interested in peace. As his deputy Faisal Husseini said at the time, the peace process was a "Trojan Horse."

Its purpose was to get the PLO bases of operation inside of Israeli territory in order to expand its ability to destroy the Jewish state. This is the reason that despite the fact that the international community has given them more financial assistance than any other people in the history of humanity, the Palestinians have not built a society. They have received tens of billions of dollars in development aid and failed to develop an operating economy.

This failure isn't due to incompetence or corruption. It is simply that the Palestinians don't want those things. They chose not to develop independent institutions. They do not want to build a state.

They have spent the money to transform Palestinian society into the most anti-Semitic society in the world where the vast majority of its people want to kill Jews and destroy Israel.

They have transformed Palestinian society into a place where Jews have no right to live - not because of some sort of occupation, but because they are Jews, and Jews, they have been indoctrinated to believe, are an abomination.

Anyone with eyes in his head can see this. It has been obvious for 16 years.

The smart set's failure to note reality back in September 2000 marked the beginning of its descent into moral oblivion.

Its first step down that road was when its members coined the pernicious term, "cycle of violence."

"Cycle of violence," means that there is no moral distinction between a murderer and a policeman, between a society geared toward annihilating its victim and its victim's actions to prevent that from happening.

The latest consequence of this moral depravity came on Friday with the publication of the so-called Middle East Quartet's much awaited report that is supposed to show us the way to peace. That report - like its predecessors insisted that a Jewish "settler," is the moral equivalence of a Palestinian murderer.

The day before the report was released, we saw - yet again - the evil empowering nature of that claim.

He broke into the Ariel family's home. He walked into their children's bedroom. He found 13 year old Hallel Yaffa asleep in her bed.

He stabbed her, repeatedly. When there was no place left to stab her in her face and chest, he turned her over and continued stabbing her in the back.

The murderer set off the sensors in Kiryat Arba's security fence when he traversed it. It took but three of minutes for the community's security team to get to the house. They shot and killed the Palestinian assailant and so prevented him from moving to the adjacent high school and transforming his slaughter into a massacre.

But Hallel was already gone.

The next day, the Mark family was driving along Highway 60. A Palestinian car carrying murderers drove up beside them and opened fire on Michael Mark, his wife Chavi and their children. Mark was murdered, his wife and daughter seriously hurt and his son was wounded as the car flipped over and over, after Mark lost control of the wheel.

On cue, the Palestinians began celebrating the murders and the murderers. The PLO governor of Hebron paid a condolence call at the home of Hallel's killer. The Palestinian media celebrated their crimes. And a new high quality animated film was released on Facebook directing viewers to murder MK Yehuda Glick. The film included driving directions to Otniel, and images of terrorists burrowing under the security fence to enter the community and avoid detection.

The Quartet recommends that both sides "de-escalate tensions." But of course, only the Palestinians are escalating tensions.

Both sides, the wise men tell us, "should take all necessary steps to prevent violence and protect the lives and property of all civilians."

But only one side is fomenting violence and deliberately targeting civilians.

Both sides, the Quartet says, should "exercise[e] restraint and refrain from provocative actions and rhetoric."

But only one side is engaging in provocative actions and rhetoric, unless the Quartet says that Israel responding angrily to the slaughter of its children and families is acting provocatively - which of course is what they are implying here.

And it gets worse. The report includes an empty call for the Palestinians "to act decisively and take all steps within its capacity to cease incitement to violence and strengthen ongoing efforts to combat terrorism, including by clearly condemning all acts of terrorism."

The Palestinians of course, will do no such thing. Abbas is the engine of the incitement and the violence. He always has been. And the fact that he's been able to get away with this since taking over from Arafat 12 years ago shows that the moral miasma of the West has become a danger to world peace.

After pretending that the people who transformed Palestinian society into the hate-filled, murder applauding mob it has become are interested in doing the opposite, the Quartet turned its guns on Israel.

Israel needs to expand its security cooperation with Abbas's US-trained militias that have been marinated in the same Jew hatred as the rest of the Palestinians, and have often propagated.

Sunday afternoon, hundreds of people stood silently outside the Ariel home in Kiryat Arba, waiting to enter the modest home to console the family. The landscape outside is pastoral.

The Ariels live off of their vineyard and the wine they produce.

Surrounded by the vines, and the hills, the Ariel's homestead looks like the sort of place where nothing bad can happen. A quiet family of profound faith, the Ariels were just going about their quiet lives, raising their daughters, tending to their vines when the evil beyond their gate entered their home and struck.

That is the difference between the two sides. One wishes to tend his vineyard. The other wishes to destroy it.

It is black and white. It is a clear distinction.

The international community's pernicious refusal to recognize this basic fact, after so many years, is a major reason that there is no peace, and there is so much bloodshed.