Just days after test-driving the hilarious "Trump is the 'you're fired' candidate; Hillary is the 'you're hired' candidate' slogan, the Clinton campaign was forced to take action after email leaks revealed the Democrat National Committee had conspired to undermine Bernie Sanders' campaign.

DNC head Debbie Wasserman Schultz was fired at the behest of Hillary Clinton: 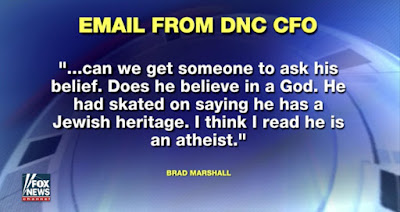 Debbie Wasserman Schultz announced Sunday she will soon step down as Democratic National Committee chairwoman, amid the fallout over leaked emails indicating an anti-Bernie Sanders bias in her operation -- a stunning development just hours before the start of her party convention.

...She apparently will step down at the end of the convention. Vice Chairwoman Donna Brazile is slated to take over as interim chair during the rest of the general election campaign.

The announcement came just hours after reports first surfaced that Wasserman Schultz may be denied a speaking role at the convention, and that she would not be presiding -- a decision apparently made under pressure from the Clinton campaign and the White House.

It's unclear whether these revelations will further widen the already massive divide between Bernie Sanders' supporters and those of Hillary Clinton.

Though, based upon thoughtful articles like this one by Adam Townsend, Donald Trump may be a far more acceptable candidate to the progressive movement than Hillary Clinton.