WE'RE IN THE VERY BEST OF HANDS: Obama Never Once Met With His Defense Intelligence Chief

President Barack Obama twice appointed former Lt. Gen. Michael T. Flynn to key national security jobs in his administration, including as deputy director of national intelligence and later as director of the Defense Intelligence Agency, yet he never once met with Flynn face to face.

The general, who spent 33 years in the intelligence field, told The Daily Caller News Foundation he was never called in for a face-to-face meeting with Obama to offer his assessment of ISIS as it rampaged through the Middle East, or during the political meltdown of Libya and Egypt, or on Iran’s efforts to build a nuclear bomb, or of the “Russian reset” that ended in shambles.

In four years, Flynn was never invited to brief the president on any kind of intelligence issue. Ever.

“Here is the crux of my relationship with Obama,” Flynn told TheDCNF in a wide ranging interview Tuesday. “Here I am, running one of the largest intelligence agencies in the world. He appoints me twice — one as the assistant director of national intelligence and one as the director of the Defense Intelligence Agency. I’m also his senior intelligence officer. And I had almost five years in combat.” 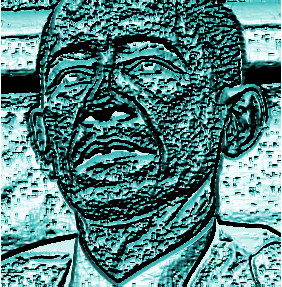 He paused, then said, “I never met with him once.”

“He’s a kind of a funny guy when it comes to relationships,” Flynn told TheDCNF. “He’s very aloof and very distant. I wasn’t on his screen at all. I wasn’t on his radar which is really sad. It’s amazing.”

Now in a turn of tables, Flynn is advising presumptive Republican presidential nominee Donald Trump and is widely reported as being on the short list to run as Trump’s vice president.

Unlike Obama, Trump has not only met with Flynn but has also spent hours listening to Flynn’s views.

Flynn’s characteristic answers are candid and direct. On the possible choice as Trump’s vice presidential running mate: “This is an honor to be considered at this level and this mix of talent. The fact that my name is being bantered around in the small group of people for this very distinguished office is something I would give serious consideration to.”

He added that “I have said I want to continue to serve this country in any capacity.”

Like Trump, Flynn is an unconventional figure who abhors political correctness.

He has just published his first book after he was unceremoniously fired by Obama in 2014 for delivering a pessimistic assessment of ISIS before Congress. The presentation went directly against the president’s prediction that ISIS was irrelevant — a “JV team.”

Flynn could have written the typical Washington “Tell All” insider’s book about the Obama administration. Instead, he teamed up with Iran and Middle East expert Michael Ledeen in writing a serious book about the threat of Islamic terrorism titled, “The Field of Flight: How We Can Win the Global War Against Radical Islam and Its Allies.”

Flynn says he is impressed with Trump. “I have met him. We sat down and talked in his offices in New York. The first time was quite a while ago. I’ve been in touch with him and his inner circle since last September,” he told TheDCNF.

“He is very, very serious about the future of this county. He is a great listener. I felt we had a great discussion about the world.”

At the first meeting, “he sort of threw out a couple of questions to me, which I felt were very telling of his insight and his knowledge.”

Then, Flynn said the two of them “walked around the world for about an hour and a half, sort of discussing back and forth.”

Flynn described Trump as “very refreshing.” The presidential candidate “really thought deeply about the issues of America and its relationships around the world. And also about America,” he said.

“My impression — and I have been around many good leaders in my career — and I found him to be a very strong, dynamic leader. And I think that’s why he is so attractive to so many people in this country right now.”

“Trump has a bigger, longer-term vision for this country than just sitting as a President for four years. He really does. And that’s what I was impressed by,” Flynn told TheDCNF.

Flynn is less charitable toward former Secretary of State Hillary Clinton, one of his colleagues in the Obama administration.

He pointed to Clinton’s “Russian reset” as one of her biggest failures. The reset was an initiative from Clinton in an effort to restore positive relations with Russian strongman Vladimir Putin.

“The Russian reset was a complete failure. That was her sort of baby. She lacked the understanding of how Russia deals on the global stage and how Russia deals with people, personalities and also on nation-on nation, and the way they see us,” Flynn said.

“She went into it with a level of arrogance and a lack of understanding.”

Unlike some skeptics in Washington, though, Flynn thought at the time that a Russian “reset” could work. “That Russian reset actually could have turned into something that resulted in some sort of mutual respect. But in fact under her leadership, it completely collapsed.”

Flynn challenged the foundation’s acceptance of $100 million in contributions from Persian Gulf Sheiks.

“The fact she takes one dollar from Saudi Arabia as any kind of a donation is a disgrace,” Flynn said. “Any of these countries destroys women’s rights. And then she stands there and claims that she’s for women.”

Hillary Clinton “should give back every red penny that she gets from those guys,” Flynn said. “Then she can talk about women’s rights.”

Obama never had Gen.Flynn in for a briefing because all that negativity would've harshed his wake-n-bake mellow and The Precedent prefers to get all his bad news by reading about it in the Newspapers after it has already happened,this way he doesn't have to figure out how to maybe try and stop it before hand. Most Likely.

Flynn will make a great DNI for Trump.