That Strange Hole in Hillary's Tongue Can Only Mean One Thing

The Interwebs have been blowing up of late with a startling picture of Hillary Rodham Clinton appearing to shriek in laughter while standing next to one Barrack Hussein Obama.

I believe it may have been Glenn Reynolds who first examined the picture closely and wondered "What the heck is that dark thing on Hillary's tongue?"

Suffice it to say that it doesn't look like a throat lozenge that might have been employed to stay her persistent, sickly cough.

iOTWreport discovered a likely cause of said cavity:

It appears to be the result of a tongue biopsy.

Such a biopsy would have have taken place when doctors feared oral cancer (interestingly, oral cancer has been linked to HPV, a sexually-transmitted disease). Here's what the CDC has to say about the matter:

What is genital HPV?

Genital human papillomavirus (also called HPV) is the most common sexually transmitted infection (STI) in the U.S. Most types of HPV are not harmful to people. There are more than 40 types of HPV that can infect the genital areas as well as the mouth and throat. Most people who become infected with HPV do not know that they are infected. 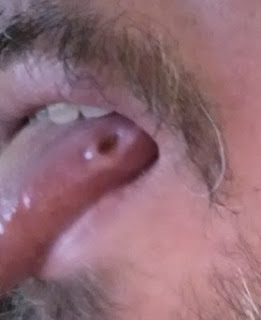 What is oral HPV?

The same types of HPV that infect the genital areas can infect the mouth and throat. HPV found in the mouth and throat is called “oral HPV.” Some types of oral HPV (known as “high risk types”) can cause cancers of the head and neck area. Other types of oral HPV (known as “low risk types”) can cause warts in the mouth or throat. In most cases, HPV infections of all types go away before they cause any health problems.

What head and neck cancers can be caused by HPV?

HPV can cause cancers in the back of the throat, most commonly in the base of the tongue and tonsils, in an area known as the “oropharynx.” These cancers are called “oropharyngeal cancers.”

What appears to be a gaping cavity on Hillary's tongue is at or near the base and not where a piercing would have occurred.

In fact, Bill Clinton's ex-lover Gennifer Flowers stated the following when asked about the relationship between Huma Abedin and Hillary:

I don’t know Huma or the Weiners. I just know what Bill told me and that was that he was aware that Hillary was bisexual and he didn’t care. He should know.

He said Hillary had eaten more p***y than he had.

Further, the cavity in the blown-up image resembles that of other tongue biopsies.

It's time for Hillary Clinton to come clean about her entire medical situation; to explain the condition of her tongue and to release all of her medical records --- including the injuries suffered in her infamous "fall" in Chappaqua that sidelined her for months.

And the fact that Ms. Abedin is on record as saying Hillary is "often confused", just two months after the fall.

The American people have a right to know what the true health situation is with this very unhealthy-looking person.

It's the beginning of a "forked tongue". The scales on her body will be appearing next.