Unleash the revisionist history. Congress released on Friday a long-classified report exploring the alleged ties of the Saudi Arabian government to the 9/11 hijackers.

The missing 28 pages from the 9/11 report begins as follows:


"While in the United States, some of the September 11 hijackers were in contact with, and received support from, individuals who may be connected to the Saudi Government..."

The "28 pages," the secret document was part of a 2002 congressional investigation of the Sept. 11 attacks and has been classified since the report's completion. As CNN reports, former Sen. Bob Graham, who chaired the committee that carried out the investigation and has been pushing the White House to release the pages, said Thursday he was "very pleased" that the documents would be released.

The pages, sent to Congress by the Obama administration, have been the subject of much speculation over what they might reveal about the Saudi government's involvement in the attacks masterminded by terrorist Osama bin Laden when he led al-Qaeda.The pages were used by the 9/11 Commission as part of its investigation into the intelligence failures leading up to the attacks.

A telephone number found in the phone book of al-Qaeda operative Abu Zubaida, who was captured in Pakistan in March 2002, was for an Aspen, Colo., corporation that managed the "affairs of the Colorado residence of the Saudi Ambassador Bandar," the documents show.

The top two members of the House Intelligence Committee cautioned that much of the information in the newly released pages were not "vetted conclusions."

"It’s important to note that this section does not put forward vetted conclusions, but rather unverified leads that were later fully investigated by the Intelligence Community," said Rep. Devin Nunes, R-Calif. and the committee chairman, in a statement. "Many of the Intelligence Community’s findings were included in the 9/11 Commission report as well as in a newly declassified executive summary of a CIA-FBI joint assessment that will soon be released by the Director of National Intelligence."

Rep. Adam Schiff of California, the panel's senior Democrat, said he hopes the newly released pages will reduce the continued speculation over Saudi involvement. "I hope that the release of these pages, with appropriate redactions necessary to protect our nation’s intelligence sources and methods, will diminish speculation that they contain proof of official Saudi Government or senior Saudi official involvement in the 9/11 attacks," Schiff said in a statement. "The Intelligence Community and the 9/11 Commission...investigated the questions they raised and was never able to find sufficient evidence to support them.  I know that the release of these pages will not end debate over the issue, but it will quiet rumors over their contents — as is often the case, the reality is less damaging than the uncertainty."

Actually, a quick skim of the report indicates precisely the opposite.

The 9/11 Commission did not actually write the newly released pages. Instead, the pages were part of the material the panel reviewed. The commission's chairmen have described the pages in the past as information based almost entirely on raw, unvetted material received by the FBI and handed over to House and Senate intelligence committees in 2002 as part of an earlier investigation of 9/11.

Current and former members of Congress have been calling for the pages to be declassified and released for more than a decade.

The 9/11 Commission concluded in its report that senior Saudi officials did not knowingly support the terrorist plot to attack the United States. The panel also found "no evidence that the Saudi government as an institution or senior Saudi officials individually funded" al-Qaeda.While the 9/11 Commission found no evidence that senior Saudi officials were involved in the 9/11 attack, the report did criticize the Saudi government for tolerating and sometimes fanning the flames of radical Islam by funding schools and mosques around the world that spread extreme ideology. The report also noted that some rich Saudis gave money to charities with terrorist links.

To be sure, what the report does provide is much circumstantial evidence that the Saudis were most certainly involved in 9/11, sufficient to convince any rational man, but perhaps not enough to launch a lawsuit against, say, the King.

The Saudi government itself has repeated called for the pages to be made public so that it can respond to any allegations, which it has long called unfounded.

"We've been saying since 2003 that the pages should be released," said Nail Al-Jubeir, director of communications for the Saudi Embassy, ahead of Friday's developments. "They will show everyone that there is no there there."

Moments after the release, Saudi Arabia has already issued its prepared press release: 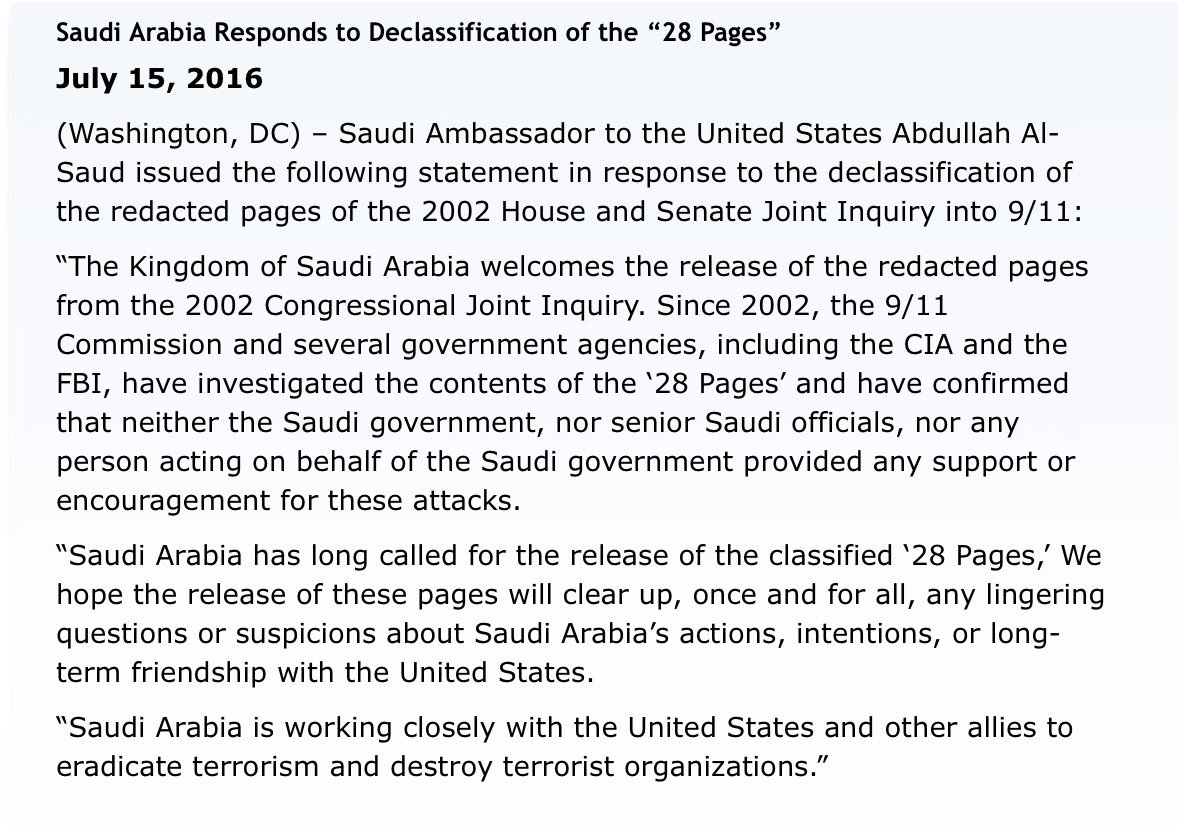 
Here are some real-time annotations of the report:

Suspected "dry run" for 9/11 carried out by men flying to party at Saudi embassy, on tickets paid for by Saudi gov't pic.twitter.com/68mUlrNqkR

The Saudis didn't give the US any info on Osama bin Laden after 1996 cos of what he'd tell them if caught #28pages pic.twitter.com/p1oAKZ0HuT

While we have yet to read the full document, one section caught our eye - the use of Saudi "charitable organizations" to finance terorrism: 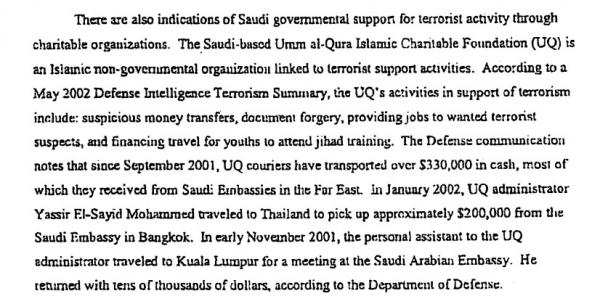 That names sounded familiar, and then we remembered this WND article:

The lawmakers noted Huma Abedin “has three family members – her late father, mother and her brother – connected to Muslim Brotherhood operatives and/or organizations. Her position affords her routine access to the secretary and to policymaking.” Last week, Republican Speaker of the House John Boehner, who admitted he hadn’t read the letters, defended Abedin, and Sen. John McCain, R-Ariz., called the accusations “sinister” and “nothing less than an unwarranted and unfounded attack on an honorable woman, a dedicated American and a loyal public servant.”

Now it has emerged that Huma [Abedin] served on the Journal of Muslim Minority Affairs’s editorial board from 2002 to 2008. Documents obtained by author Walid Shoebat reveal that Naseef served on the board with Huma from at least December 2002 to December 2003.

Naseef’s sudden departure from the board in December 2003 coincides with the time at which various charities led by Naseef’s Muslim World League were declared illegal terrorism fronts worldwide, including by the U.S. and U.N.

The MWL, founded in Mecca in 1962, bills itself as one of the largest Islamic non-governmental organizations. But according to U.S. government documents and testimony from the charity’s own officials, it is heavily financed by the Saudi government.

The MWL has been accused of terrorist ties, as have its various offshoots, including the International Islamic Relief Organization, or IIRO, and Al Haramain, which was declared by the U.S. and U.N. as a terror financing front.

The MWL in 1988 founded the Al Haramain Islamic Foundation, developing chapters in about 50 countries, including for a time in Oregon until it was designated a terrorist organization.

In the early 1990s, evidence began to grow that the foundation was funding Islamist militants in Somalia and Bosnia, and a 1996 CIA report detailed its Bosnian militant ties.

The U.S. Treasury designated Al Haramain’s offices in Kenya and Tanzania as sponsors of terrorism for their role in planning and funding the 1998 bombings of two American embassies in East Africa. The Comoros Islands office was also designated because it “was used as a staging area and exfiltration route for the perpetrators of the 1998 bombings.”

The New York Times reported in 2003 that Al Haramain had provided funds to the Indonesian terrorist group Jemaah Islamiyah, which was responsible for the 2002 Bali bombings that killed 202 people. The Indonesia office was later designated a terrorist entity by the Treasury.

In February 2004, the U.S. Treasury Department froze all Al Haramain’s financial assets pending an investigation, leading the Saudi government to disband the charity and fold it into another group, the Saudi National Commission for Relief and Charity Work Abroad.

In other words, the US government knew about this terrorist front all the way back in 2001, even as Hillary's right hand (wo)man was working for an affiliated entity for years later?

We hope to find out more after reading the full document shortly, although sadly we are convinced the important sections will be fully redacted.