Confused Who Has the Majority in Congress? You’re Not Alone.

In 2014, Republicans won a majority in Senate. However, if you’ve been watching the Senate lately, you’d be forgiven for wondering who is actually in charge.

Democrats demand—and receive—amendment votes, while Republican amendments are stifled. Appropriations bills, ostensibly written by Republicans, come to the floor lacking any GOP priorities, while conservative efforts to amend the bill are set up to fail. 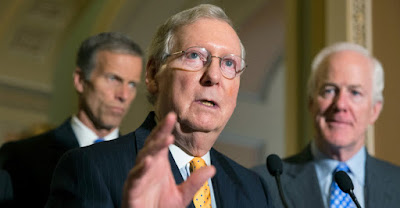 Even more troubling are the policies coming out of this Republican-led Senate. Appropriations bills are passed, but at higher spending levels than even President Barack Obama requested. Just this week, the Senate voted to bail out the U.S. territory of Puerto Rico—without considering any of the economic reforms supported by conservatives.

In a sign that principles were about to be shelved, all 16 Republicans and 14 Democrats on the committee unanimously supported an amendment by Sen. Jeff Merkley, D-Ore., to provide $500 million to the U.N. sponsored Green Climate Fund—the principle funding mechanism for Obama’s international climate change treaty.

For the record, this is the same treaty that the Obama administration imposed upon taxpayers without the advice and consent of the Senate, and the same funding mechanism that GOP Senators previously swore up and down that they would fight tooth and nail to oppose.

But the committee action got even worse with the passage of an amendment offered by Sen. Jeanne Shaheen, D-N.H., to add $37.5 million to the United Nations Population Fund, which provides services for “international family planning and reproductive health”—that is, taxpayer funded abortion performed overseas.

In a Republican controlled committee, this amendment supporting abortion passed 17-13, thanks to the votes of Sens. Susan Collins, R-Maine; Lisa Murkowski, R-Alaska; and Mark Kirk, R-Ill.

Most disturbing, however, was that the entire bill—containing language to fund abortion, and to fund the president’s climate change treaty—passed the committee 30-0.

Some will argue that this is just a committee process, and that the real consideration of the bill will be on the Senate floor, where all senators will have the opportunity to weigh in. Perhaps—but only if Senate Majority Leader Mitch McConnell, R-Ky., allows senators to participate in an open process (which he has lately been loath to do).

If and when this bill hits the floor, we should expect that Republicans will stand up for what they’ve said they believe in, and vote to strike provisions of this bill that violate their principles.

Republicans may be in charge of the Senate, and Democrats may be in the minority. But it is getting increasingly difficult to tell the difference.

Sorry to burst your bubble, but the Democrats and Republicans are the same Establishment elite monster. They just offer different bait to different sets of boobs, which are us. They don't care which bait we swallow, the outcome is the same.

It's all Kabuki theater, and lately they aren't even trying to keep the act convincing. It doesn't matter what we think or say, the only thing that matters is that our owners keep on living like kings. We don't matter at all to them, and they couldn't care less whether we thrive or die miserably.

That's why they pass 2000 page bills that no one has read, but each one of those huge masses of paperwork allow endless payoffs, carveouts, entitlements, and so on.

Our Republic isn't just dead- the corpse is becoming really putrid. Next, you can expect that the counters of the vote will determine that Cankles has won, after our sham election. I'm voting for Trump, but I very much doubt it will matter.

All any of us can realistically do is keep our weapons clean, well-maintained, and ready; I hope to take at least one of the bastards with me when they take me down!

Well said Eskyman. I'm with YOU.

All the fomented turmoil that is happening in America (Dallas most recently) and around the world is DELIBERATE. The Uniparty wants chaos and division. It's pure Alinsky. And Obama is an Alinsky disciple, so is Clinton. These people need to be imprisoned or shot. No more tolerating these liars and agitators. They need to be STOPPED by any means possible.