GOOD NEWS: Neither Pence Nor Trump Believe in the Democrat Party's Climate Scam


For all Mike Pence’s faults, he’s not a member of the Cult of Climastrology. 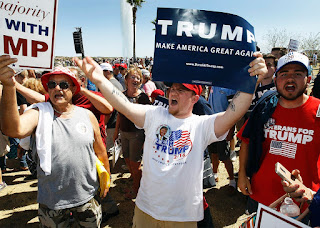 On Climate Change, Pence and Trump Are a Perfect Match

Donald Trump calls global warming a “hoax.” He claims climate science is “bulls***,” and he’s even described it (supposedly as a joke) as a Chinese conspiracy. So perhaps it isn’t that surprising that Mike Pence—whom Trump just named as his running mate—has similar views.

“Global warming is a myth,” Pence wrote nearly two decades ago in an op-ed unearthed by . “Environmentalists,” the Indiana Republican explained, “claim that certain ‘greenhouse gases’ like carbon dioxide are mucking up the atmosphere and causing the earth to gradually warm. Despite the fact that CO2 is a naturally occurring phenomenon in nature, the greenpeace folks want to blame it all on coal (another natural mineral) and certain (evil) coal burning power plants.” He added that “the earth is actually cooler today than it was about 50 years ago.”

Oh, noes, 20 years ago! And, the computer models have failed over that period of time. Go figure.

He was wrong about being cooler than 50 years prior, which isn’t actually nearly 20 years ago, more like 2001, as you can see from the Wayback Machine archive (seriously, this is how unhinged Leftists get in their research). It was warmer in 2001 than 1951, especially since that was a time of cooling up to the late 1970’s.

Anyhow, he’s expressed a Skeptical viewpoint since, and

Pence has also been an outspoken opponent of policies that would reduce greenhouse gas emissions. He told the Star Press that a cap-and-trade proposal passed by the US House of Representatives in 2009 would raise energy prices and harm the economy. The legislation would have put a limit and a price on the carbon emissions that cause climate change. “I really believe Democratic climate change legislation will cap growth and trade jobs,” he said.

As governor of Indiana, Pence has continued to fight against policies intended to combat global warming. His latest battle? An effort to block President Barack Obama’s Clean Power Plan, a set of Environmental Protection Agency regulations that would limit greenhouse gas emissions from coal-fired power plants. Last year, Pence called Indiana a “proud pro-coal state” on a press call, according to the Indianapolis Star. He vowed to resist the new regulations.