The most breathtaking and frightening fix in American history.

Today we have witnessed a most frightening manifestation of the corruption of our political system. Doubly frightening because of what it augurs for all our futures if Hillary Clinton should prevail in the November elections. At the center of this corruption – but hardly alone - are the criminal Clintons – the Bonnie and Clyde of American politics - and their Democratic Party allies; but we should not fail to mention also the Republican enablers who would rather fight each other and appease their adversaries than win the political wars.

We knew they could fix the Department of Justice; we suspected they could fix the FBI. What we didn’t know was that the fixes would be this transparent: the secret meeting with a chief culprit and the DOJ head; the next day announcement by Justice that the Clinton bribery investigations would be postponed until well after the election; the suspiciously brief FBI interrogation of the former Secretary of State who during her entire tenure had recklessly breached national security protocols, deleted 30,000 emails; burned her government schedules; put top secret information onto a hackable server in violation of federal law; and topping it all the failure of the FBI director after enumerating her reckless acts to recommend a prosecution - all within a single week, and just in time for the Democrats’ nominating convention. It was, all in all, the most breathtaking fix in American history. 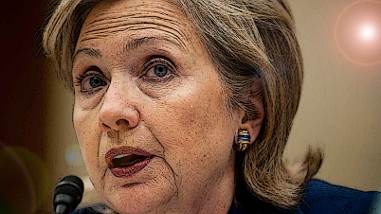 And it wasn’t ordinary criminal corruption. It was corruption affecting the nation’s security by individuals and a regime that have turned the Middle East over to the Islamic terrorists; that have enabled America’s chief enemy in the region, Iran, to become its dominant power; that allowed the Saudis, deeply implicated in the attacks of 9/11, to cover their crimes and spread Islamic hate doctrines into the United States; it was about selling our foreign policy to the high bidders at home and abroad, and about making America vulnerable to our enemies.

What can be done? First of all it’s a matter of deciding who you believe - the political elites who are telling you everything is normal, or your lying eyes? The political system is corrupt and cannot clean its own house.  What is needed is an outside political force that will begin the job by putting the interests of our country first again. Call it what you will – nationalism or common sense – it is the most pressing need for the country now. Such a force would have to find its support outside Washington. Call that what you will – populism or democracy – no reforming leader can be elected without it. No political leader can begin to accomplish this task, without the support of ordinary Americans registered at the ballot box.

My only hope can be that this will motivate a lot of people who were going to sit out the 2016 election to vote against Hillary no matter how tightly they must hold their noses when they pull the lever.

I read many comments at various Websites that Comey was a man of integrity and would do the right thing. I guess everyone has a price. There is no such thing as integrity in our political class. NONE.