At the DNC, Michelle Obama put on her victimhood hat one more time and declared, “I wake up every morning in a house that was built by slaves.” It’s not a new line, but an ongoing mantra. Back in 2009, Michelle whined that, “Many slaves who couldn’t enter the building worked to create the building.”

But that’s too past tense. Michelle’s house continues to be built and maintained by slaves. Her lavish lifestyle of endless vacations, parties and public appearances is funded by millions and millions of slaves.

Michelle Obama lives a life that is more lavish and luxurious than that of the average plantation owner.

She has 26 staffers that are part of a White House staff of thousands. That’s more than many crowned heads of state. Compare that to 12 servants for Thomas Jefferson.

Michelle has more directors than some corporations. And working for her is a Marie Antoinette experience. “The First Lady having the wrong pencil skirt on Monday is just as big of a f___ up as someone speaking on the record when they didn’t mean to or a policy initiative that completely failed,” one former staffer said. 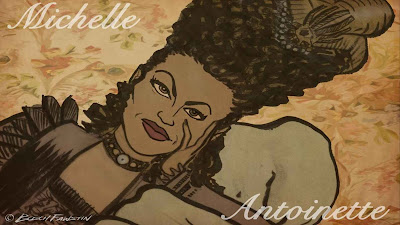 Of course that’s their business. Michelle’s staffers chose their jobs and they get paid. It’s the taxpayers who have to pay for it all who are forced to be her unwilling slaves.

Michelle’s house, her luxurious lifestyle, is built by taxpaying slaves who are forced to turn over their money to fund her pleasures. She spent more money on one night in Morocco than the average American family will see in five years.

In Dublin, Michelle Obama and her entourage took a sightseeing trip that cost over $250,000. Michelle's people bought up 30 rooms at the five-star Shelbourne Hotel while she stayed in the Princess Grace Suite which has more living space than most American homes. The Shelbourne Hotel wasn't built by slaves. But it was funded by them. So are all of her jaunts, excursions and parties.

When she shops around Paris and then flies over to London in a 757 to see the sights in London, her slaves pick up the tab. When she and her husband decide to fly out for a “date” to New York while the city is shut down, it’s her slaves in the big city watching the motorcade pass who have to pay for it. Their Africa trip cost millions. American slaves paid for it with their blood, sweat and toil.

Maintaining the Obama lifestyle cost $1.4 billion a few years ago. It’s unknown what it costs today.

Obama’s White House parties cost anywhere from $200,000 at the cheap end to over $500,000. Americans have no more freedom to decide whether to pay for another Obama vacation or event than slaves did in deciding how to serve their masters and mistresses.

All they can do is watch from a distance while their masters stuff their faces, gallivant cheerfully on tours through foreign countries while staying at posh hotels and then make them work to pay for it.

But they did build that.

Slaves built the Obama lifestyle.  Slaves who struggle to get by. Who scrimp and save to have a few hundred dollars on hand in case of an emergency. That’s the cost of a single dish at a dinner to their masters in the White House. Slaves who fear losing their jobs and being unable to provide for their families watch their hard-earned money being squandered on another vacation and another party.

It’s not hard to guess why.

The Obama lifestyle is just the tip of the iceberg. Tens of thousands of more modest government plantation owners cling to their skirts living off the stolen toil of the government’s slaves.

Government, like slavery, is an institution. Like slavery, it claims to civilize its dependents. In reality it exploits them. It promises them security in exchange for freedom. It takes away the products of their toil and then tells them that they didn’t build that. It claims a false moral authority to exploit them.

Michelle Obama is a slave-owner lecturing her slaves about slavery. Her moral authority to enslave Americans is based on a slavery that took place 150 years ago. And Michelle and Barack are the tip of a very large institution which is built on depriving Americans of their political and economic freedoms.

Slavery was based on the notion that some people are superior to others. That same idea runs through Obama’s speeches. It is the lifeblood of the twisted thing that the left has turned liberalism into.

The Obamas have the right to enslave us because they are on “the right side of history”. They can exploit us because they know what is better for us. They can take the work of our hands from us because we didn’t build that, they and all the rest of our government masters did the real building.

As the Democrats continue their circus of hate in Philly, it ought to be remembered that this was where Thomas Jefferson wrote that “Life, Liberty and the pursuit of Happiness” were inalienable rights and that governments derive their just powers from the consent of the governed. Governments do not gain their authority from any innate superiority, but from consent. The Obama theory that government gains power in proportion to its historical moral superiority is slavery wrapped in hypocrisy. The attempt to perpetuate a new slavery by invoking 19th century slavery, as Michelle Obama did, is a moral obscenity.

And it is an injustice that must end.

As the ignorant 'first lady' obviously never opened a history book,she doesn't know that only the outer walls have any chance of having been built by slaves.The entire inner structure was built in the 1948-1952 time frame as the floors began collapsing during the time when Harry Truman was President.Of course,Truman WAS a democrat and the people who actually owned slaves were democrats,so what is the first occupant saying about Truman?