What strange times we live in. Hollande cannot declare war on ISIS because ISIS is not just some foreign power in far-away lands which can be bombed from the air with impunity. ISIS is Islam and Islam is in France. Islam is in Paris and Marseilles. Like a rapidly expanding virus, Islam has invaded France and is attacking the racial base, the cultural base, the spiritual base and the political base of the host country itself.

So Hollande’s war is a myth, which is hardly surprising. After all, what is he realistically able to do? Invade Paris and level the banlieues? Build internment camps and lock up everyone with a beard? Hollande knows he is on difficult ground here, as can be gleaned from his following abject statement: “We must fight this war by all means, while respecting the rule of law, what (sic) makes us a democracy.”

In other words, the plump, jowly, bespectacled, soft-handed Hollande intends to take a small plastic knife into a fight against a muscular, fanatical opponent toting an AK-47 — with all too predictable results. France, like so much of the West these days, finds itself in a no-win situation. Our ruling elites have allowed a supremacist people and a violently supremacist culture into our peaceful liberal democracies and are now surprised to discover this was not really a very good idea and cannot be solved by mouthing liberal platitudes alone.

Some of us have pointed out the foolishness in allowing the barbarian 7th century to jump into bed with the advanced 21st century, but we failed to make much headway. In point of fact, we were cast into the wilderness allocated for the dissident class of racists, xenophobes and Islamophobes who thought they knew better than our illustrious Traitor Class of cowardly political careerists and media whores.

And now we in the West find ourselves in desperate trouble. The slow march of time is finally speeding up. The demographic shift is starting to make itself known. When 100,000 Muslims in France became 200,000 the end of the world was not nigh. But when today’s 6 million Muslims of France become 12 million by 2030 and 24 million by 2050 — then the end of France becomes very much nigh indeed. And please bear in mind that a baby born today will only be 34 in 2050. This is not about something in the unimaginably distant future.

New Year’s Eve 1999 seems only yesterday. Who can ever forget the madly grinning Tony Blair and his ghastly wife coercively linking arms with the poor old Queen as they cavorted and capered their way into a new millennium of Labour Party-based hope and optimism; into a European Union whose glorious future was laid out under the oxymoronic EU motto of “United in Diversity”? How we laughed and cheered in the final hours of 1999! How we danced, drunk on the promise of a brave new world!

But here we are sixteen years later in an altogether different world. A world where Islam weighs heavily on the West. A new world which started on the 11th of September 2001 and continues through to the present-day beheading of Father Jacques Hamel. Where will we be in another sixteen years? If Islamic terror went from occasional stories in 2000 to constant front page news in 2016, who would rationally argue against a civil war in France by 2030? Apart from half-witted left-liberals I mean… 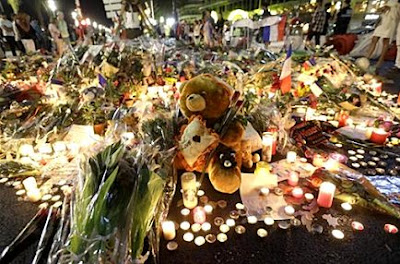 Who remembers the news stories from the final decade of the 20th century? 1989/1990 gathered a lot of interest as communism withered and crashed in Eastern Europe, but there were few horror stories about Islam. And now? Every day brings fresh stories of fresh Islamic atrocities around the world and within the West. Bombings, shootings, stabbings, rapes and sexual assaults. Again and again and again.

And after each new Islamic horror the West lights its candles, holds its vigils, clasps its teddy bears and buries its dead. When Hollande proclaims France is at war, he is lying. He is just grandstanding, just generating vainglorious sound bites. He is shouting at the pub brawler safely under police arrest, long after the pub brawler bashed Hollande on the snout and put him firmly on his backside in the Frog & Firkin. It is not a real war, you see, because it takes two sides to make a war. One to attack and one to defend. If there are only attackers and no defenders it is not a war — it is a massacre.

France is in desperate trouble. For all the talk of war, there is no resistance. Patrick Calvar, head of the General Directorate for Internal Security (DGSI) warns of impending civil war, but talks mainly of aggression coming from the Right, not Islam. Hollande talks about war but never mentions the real enemy, which is Islam, not ISIS. The enemy is not in Iraq or Syria. The enemy is in Paris and Nice and Marseille. The enemy is within. The enemy holds a French passport. The enemy of France is French and the enemy of France is growing exponentially.

It certainly looks like war in France though. With half the French army on the streets providing “reassurance” patrols it hardly looks like peacetime does it? But Hollande needs to stop shouting about war against ISIS and start doing the basics in terms of safeguarding French citizens. Such as monitoring known jihadists, for example, in order that they might be stopped from chopping off priests’ heads.

The descent of post-Christian France into Islamic France will take decades, but if there is no resistance, Islamic it will become. Islam by a thousand cuts is perhaps the best way of understanding France’s future. Prime Minister Valls has stated that French people must get used to living with terrorism. I don’t think he said Islamic terrorism, just plain old terrorism, which rather goes to show just how successful Islamic terrorism is…

Can France be saved? It can, but it would mean removing Islam from public life. It would mean closing down the mosques. It would mean deportation. French Muslims in their millions wouldn’t like this, so it would also mean civil war. Real civil war à la 1990s Yugoslavia. Hollande and Valls are not prepared to take the steps necessary to ensure France’s survival. Even Marine Le Pen might baulk at instigating civil war, but France’s survival has moved beyond peaceful measures now, through the sheer weight of Muslim numbers combined with a fanatical belief system.

So we wait to see what happens. And whatever happens to France could also happen to many other Western European countries. Germany, Holland, Belgium, Britain and Sweden are all on the same incremental but remorselessly unstoppable trajectory toward Islamic confrontation or post-Christian submission.

No one can predict the future but I think one thing can be said with absolute certainty — the next ten years will be NOTHING like the last sixty-five years of relative peace and prosperity. Really nothing at all. And right now, all eyes are on France.

Paul Weston is a British-based writer who focuses on the damage done to Western Civilisation by the hard left’s ongoing cultural revolution, which seeks to destroy the Christian, capitalist and racial base of the West. He is now one of the leaders of PEGIDA UK, and is also the leader of Liberty GB. His website may be found here, and his political Facebook page here. For links to his previous essays, see the Paul Weston Archives.

As far as I can tell, they have already decided. I won't give them another thought unless they do something other than further oppress their native population for their "own safety". Same with Germany. The other countries, if those two remain steadfastly self-destructive, will be forced to follow, one way or another.