Obama and the most successful national subversion in world history

America is coming apart - not just the United States, the sovereign nation, but our Constitution, our culture, our traditions, all of what "America" has come to mean.

It is not by accident.

What we are witnessing is the product of eight years of Barack Obama and his divisive rhetoric and destructive policies.

Obama's "transformation" is a euphemism for the crippling and humbling of a great nation he considers racist, oppressive, venal and dysfunctional.

But Michelle Obama said it best.

And that different place as a nation is fragmentation and collapse.

It is not a conspiracy. 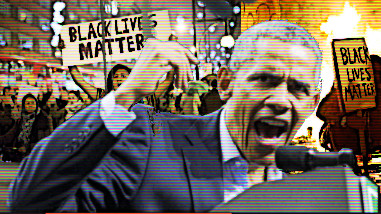 There is, in fact, a deliberate, coordinated and ongoing effort to subvert the United States as a capitalist, Judeo-Christian based republic and replace it with alien political ideologies and cultures incompatible to personal liberty.

None of what is happening is "home-grown."

There is an alliance between the global political left and radical Islam, two totalitarian philosophies that cannot dominate the world without first destroying capitalist, Judeo-Christian-based democracy, the United States being both the foremost proponent and primary target.

Just as Islamists attempt to impose their religion on the world in a totalitarian fashion requiring unwavering obedience, so do radical leftists strive to create an omnipotent socialist state that will control every aspect of daily life and will enforce a universal brand of "social justice" on all mankind.

I will not mince words.

The Democrat Party now represents, at least philosophically if not operationally, the American subsidiary of that alliance.

The Republican Party is dominated by globalists, obsessed with the acquisition of personal power and profit, and uninterested and willingly impotent in defending the rights, liberties and well-being of American citizens. The GOP leadership has solidified its choice to no longer represent what had been its constituency, but to adopt the identity of junior partners in the ruling class.

To summarize, the crises we are currently experiencing are the direct consequence of the policies pursued by Barack Obama, a coffeehouse communist and Islamic groupie, who leads a lawless cabal of fellow-travelers, financed by domestic anti-American and foreign sources, supported by professional agitators, facilitated by a supine Republican political opposition and cheered-on by a predominately left-wing media.

Societal division and social unrest are tactics used to destabilize and demoralize, to further fundamentally transform the country, which has already been undermined economically, educationally and culturally from within.

It has always been the dilemma of social revolutionaries, whether communist or Islamic, that as long as individuals embraced liberty and had the belief that his or her Divine spark of reason could solve the problems facing society, then that society would never reach the state of hopelessness and alienation recognized as the necessary prerequisite for totalitarianism.

Political correctness is part of that effort. Its aim is to narrow the range of thought in order to make independent thinking literally impossible, because there will be no words in which to express those thoughts. It is accomplished through the systematic destruction of words and phrases as "microaggressions" or simply making statements that are patently untrue.

For example, despite exhaustive efforts by the Mainstream Media to paint Black Lives Matter (BLM) as a movement dedicated to "racial equality" or "social justice" and engaging in "peaceful protests;" it is, in reality, a violent, racist, and dangerous domestic terror group funded by rich white men (links to Ben and Jerry's Foundation and George Soros) devoted to destabilizing American socio-cultural infrastructure, legitimized by Obama with a presidential invitation to the White House, and endorsed by the Council on American-Islamic Relations (CAIR), a Muslim Brotherhood front group and the unindicted co-conspirator in the prosecution of the Holy Land Foundation for providing support to the terrorist group Hamas.

That is a pattern of connected dots, which our hopelessly corrupt political-media establishment, as acts of self-preservation and complicity-avoidance, tries tirelessly to disconnect.

Most of the social chaos and extremism we are currently witnessing in our country is the product of a well-funded and well-organized anti-American, predominately foreign, radical Islamo-leftist agenda - and an administration that enables rather than opposes the aims of our enemies.

It is time for patriots to take America back.

Excellent, you nailed it.

"It is time for patriots to take America back."
Absolutely.
Some of us still possess the knowledge of liberty passed on to us as a legacy by our patriot Founders. We are still in possession of the Divinely inspired Constitution and respect for the rule of law. Above all, we know why it is essential that we retain our Second Amendment rights.

A Call to Arms if I've ever heard one.

This is the most, comprehensive indictment of Obama and the left ever printed before, and it is the collaboration of the leftist media that has made the betrayal possible.

It is interesting that the way the Charleston and Dallas religious people came together after the deadly attacks in their cities prevented the same destructive outcome that occurred in Ferguson, NYC, and Baltimore where the protestors from COMMUNIST Party USA, New Black Panthers, SEIU and other unions, some Islamic anti-Jew groups, were able to dominate the events. George Soros may have funded these groups, but I bet he never paid for any of the destruction to the Black-owned houses or businesses.

The time to take anything back was when there was something to take back... as in 2012. But, there was "treachery in the air" as well as voter fraud, and the Country was tipped back to the Kenyan. No chance of taking anything back before the Conventions, and what's to be said when the Beast goes to inhabit The White Hut after we suffer massive voter fraud, illegal voting, and a stolen election, when the Appeal will be: "lets just all move along".
I think the only solution is to shame every Republican you know to vote for Trump, and try to make it a landslide.

"I think the only solution is to shame every Republican you know to vote for Trump, and try to make it a landslide."

Hello Doug, can you hear me?? Are you on board with this sentiment or not? I'm not current over here, couldn't take the TDS any longer.

So, still infected or has the fever broke?
MM

Everyone needs to see this. It will cause a lot of heat but I believe that you have exposed the reason for many of today's event's. They are diversions to keep the American people looking the other way while Obama sets up his obsession to remain in power. His latest presidential decree to allow United Nations troops to enter the United States as an aggressive force against the American people.

I will do my best to continue to forward this message.