An Islamist shot up a shopping mall in Munich, Germany, located just blocks from the site of the 1972 Olympic massacre. Which was conducted by other Islamists in the name of their ideology.

This was, of course, just after they started executing children in a McDonald's fast-food restaurant, which was reminiscent of the Nice terror attack in which the truck Jihadist apparently targeted women with strollers. 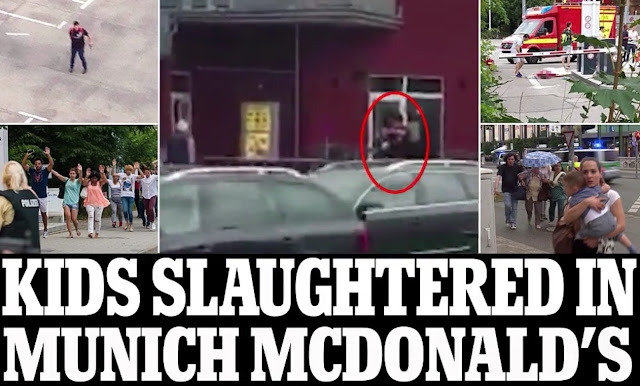 And let me venture a guess: the latest little Jihadist massacre was conducted by -- or facilitated through -- some of the million or so of Islamist "migrants" who German President Angela Merkel allowed to flow unchecked into the country.

So, by all means, let's follow through with Hillary Clinton's plan to import a million more Islamist refugees.

Hat tip: BadBlue Real-Time News. Note: this post was updated to reflect a sole terrorist, not a group.

Sorry
This is complete BS.
The guy was mentally disturbed and followed mass murders. He wanted to out in a big bang. Had a german passport and grew up there. This is in no way connected to any immigration policy. Sorry, but if you spread lies then you should at least have the facts straight. But that is obviously not neccessary in the republican camp.

People with a hatred of western culture and people don't belong in the west. Why are they there if their own culture is so wonderful? Archaic fanatical third world shouldn't be imported, it's not enriching, it's to all of our peril.