Suddenly, The Washington Post is Worried About the Ever-Expanding Power of the Presidency

We’ve just spend 7+ years living under a president (perhaps yours, not mine) who has increased the power of the Chief Executive and the agencies which report to him by leaps and bounds. Obama has used whatever power he could take, legally or not, constitutionally or not, whenever he wants. The rule making emanating from the White House and federal agencies has been breathtaking. But, now, this is suddenly a problem. From the hoity-toity halls of the Washington Post, can you guess why? The headline says it all

Donald Trump and the expanding power of the presidency

The web front page headline reads “Today’s presidency offers almost unchecked power, enabling a potential Trump administration.” Obviously, this is all about Trump using the power of the presidency, as expanded by many presidents, without really noting that a) Obama has done more than any modern president, and b) Hillary would do much the same. Though, whether she would blow off Congress, even those in her own party, as Obama has done is up for question 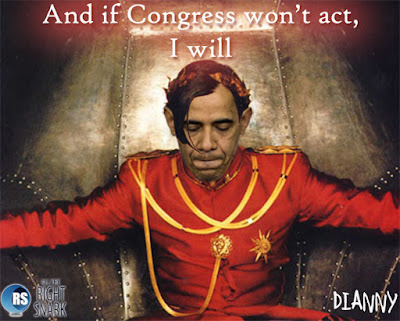 Donald Trump has promised not only to be the voice of the American people but also to take decisive, immediate action. As president, he has said he would move fast to destroy the Islamic State, scrap bad trade deals, build that wall, “stop the gangs and the violence,” and “stop the drugs from pouring into our communities.” He would “immediately suspend immigration” from countries where terrorism is rampant. He might even defy treaty obligations and decline to aid NATO allies.

The Republican nominee has led some to conclude that he intends a sweeping expansion of presidential authority. His rhetoric implies a muscular, almost unitary, presidency that would be at least as expansive as what historian Arthur Schlesinger Jr. famously dubbed the “imperial presidency” — his critique of Richard Nixon’s abuse of power in the era of Watergate and Vietnam.

But scholars of the presidency say that Barack Obama, George W. Bush and their predecessors have added so many powers to the White House toolbox that a President Trump could fulfill many of his promises legally — and virtually unchecked by a Congress that has proven incapable of mustering much pushback for decades .

Interesting. Hillary has made lots of promises to Do Things: why does this not apply to her? Candidates make all sorts of promises during election season. Suddenly, Donald’s are Bad. Like Hitler bad

Trump’s critics hear his sweeping promises as the words of a classic strongman, a ruler who seems prepared to push aside the cobwebs of bureaucracy and the checks and balances of American federalism to produce instant, decisive action. Critics have compared him to Mussolini, Hitler, Vladi­mir Putin, Saddam Hussein and Argentina’s Juan Perón. Trump has praised Putin and Hussein for being tough on terrorism. In the past, Trump has singled out China’s crackdown against pro-democracy activists in Tiananmen Square in 1989 as a demonstration of “the power of strength.”

Of course they do. Why not Hillary, though? For that matter, what about Obama, who has, furthermore, use and/or allowed federal agencies to target and abuse private citizens and groups that oppose him? Does that not bear the marks of a classic strongman?

The long article continues in its concern that a president Trump (not a president Hillary, mind you, because she’s a Democrat) would become an uber-unilateral president, forgoing Congress. Without mentioning Obama doing exactly that.

If a president does overstep his authority, Congress could cut off his funding or impeach him, but a President Trump could counter with the power of the bully pulpit.

Huh. When the GOP attempted to do this to Obama, Democrats and their media Comrades screamed bloody murder.

But Devins has concluded that the record of the past two decades shows that Congress “lacks both the will and the way to check the presidency.

“Today’s system of checks and balances,” he said , “is an abject failure.”

Suddenly, liberals are concerned about this. Where was the concern the past 7+ years? We know the answer.

But, let’s be clear: this expansion of power is a bad thing. While I certainly have a concern with Trump’s Big Government leanings, what’s wrong with rolling back federal regulations enacted by executive actions? He could hamstring much of Obamacare while simply following the law. He could eliminate the Contraception mandate, the work rules requirements, all the IRS positions created to fine citizens, and so much more. He could roll back the EPA’s ‘climate change’ rules, such as the Clean Power Plan, along with the dictatorial Waters Of The US plan. Negate the Paris climate accord and Iran deal. He could simply use the power of the presidency to enforce the law on illegal aliens.

But, article Marc Fisher does sorta make a good point earlier in the fable

Some Trump initiatives, such as repealing the Affordable Care Act, cutting taxes or expanding Social Security, would require extensive, close work with Congress. But presidents already have the power to do much of what Trump has proposed. Congress has given the president the authority to negotiate trade deals, for example, and Trump could try to renegotiate the nuclear deal with Iran.

I’ve beaten on this subject before, the notion that Congress crafts legislation that is entirely too broad, which allows the Executive Branch to create rules and regulation, which carry the force of law to the point of criminal and civil penalties against private citizens and entities, out of seemingly thin air. For instance, there is not one instance where the words “sterilization” and “contraception” appear in the Patient Protection (snicker) and Affordable (snicker) Care Act, nor any mention of abortifacients in an manner. This was created out of thin air by HHS. The bill was so big and broad that things can almost be done at will. The Environmental Protection Act was a very good idea. It has since been expanded by the EPA and other agencies to mean whatever the hell they want it to mean.

This is the case for so much legislation, which is often so broad that the Executive Office can find a rationale for doing as they will at will. Legislation, when passed, should be specific with no wiggle room. Deal with the specific subject, and, if the POTUS wants more, he/she should come to Congress and provide the reason why, along with a plan that includes things like implementation, who is in charge, and the expected results. It is the role of the Executive Office to enforce law as passed by Congress, not create it themselves. If the legislation isn’t specific, it gives the EO the ability to take power.

And, while we’re at it, repeal the 17th Amendment and institute term limits on Congress.

Read more at The Pirate's Cove. Image: All the Right Snark.