Psychological warfare tactics have long been used to influence an opponent’s attitude and plans.

Two of the most famous psyops warriors in World War II were Tokyo Rose, representing the Imperial Japanese Empire, and Lord Haw-Haw, broadcasting from Hamburg.

If you goggle “psyops;” this is the first definition from Military.com:

“PSYOPS is the dissemination of truthful information to foreign audiences in support of U.S. policy and national objectives. Used during peacetime, contingencies, and declared war, these activities are not a form of force, but are force multipliers that use nonviolent means in often violent environments.”

This very official-sounding definition of psyops is, itself, an example of psychological warfare for it can, and often does, circle the truth without ever going straight through it. It’s not uncommon for information in psyops to masquerade as truth, for, as we know, the first casualty of war is truth.

In political warfare, too, truth is regularly wounded – sometimes mortally.

Here are two examples of psyops from the Vietnam War. (A shift to a different venue of psyops – political psyops, or poly-psyops – is ahead. That is the truth.)

A resident in a South Vietnamese village in the Mekong Delta was once handed the psyops document below. It extolled the virtues of the VC/NVA as incarnated in the man pictured: Ho Chi Minh. At the time, Saigon was the South Vietnamese capital. Today, it’s called Ho Chi Minh City. 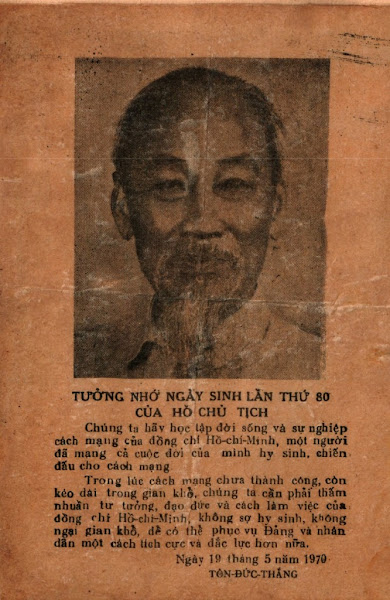 That same villager might have picked up an opposing psyops document, pictured below, after it dropped from an American military aircraft. This one was intended to persuade the villager that B-52 bombers would drop on the local VC/NVA contingent in order to keep the villager free – or something like that. I don’t remember how the copy reads, but the photos tell the tale. 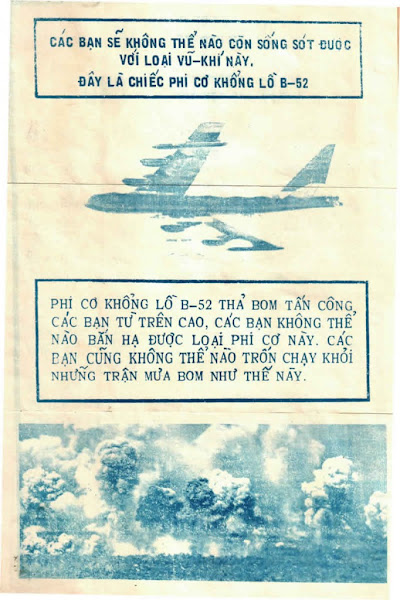 Now we move up to the present and poly-psyops.

“Retired Lt. Gen. Michael Flynn, who has been widely discussed in the last few days as a possible running mate for Donald Trump, said Sunday that women should be the ones to decide about abortion and that same-sex marriage is not a big issue, positions that dramatically conflict with the views of many conservative Republicans.”

At the 11th paragraph, we also learn:

“Flynn also said he remains a registered Democrat, having grown up in a “very Democratic family” in Rhode Island.”

The intended impact on Republican voters is similar to the photo of a B-52 airstrike. But in this case, it’s meant to alarm those who plan to vote for Trump by dropping the possibility of a Democrat as his VP choice.

Is it true? Or, is it disinformation? Or, perhaps, some blend?

The first paragraph prompts these queries from a reader who might question the LATimes’ motive in posting it. It is, after all, not known as a Pro-Trump “news” outlet.

(1.) What does “widely discussed” mean? How wide is wide?

(3.) In what setting was this proposition “discussed?” At a bar where journalists hang out?

(4.) Who participated in this discussion? J-school students in a senior seminar?

(5.) What did those participants conclude about the Flynn proposition?

(6.) And, what was/is the political alignment of those discussing? Libertarians?

Those are just a few questions to ask in testing the veracity of the report.

The article adds, “The New York Post and the Washington Post have both reported that Trump was actively considering Flynn…”

Oh, well, if those outlets are releasing the same story, it must be true. Unless, that is, it was a case where Outlet A was told by a “source” that Flynn was being vetted, and Outlet B just repeated A’s report. Then Outlet C cited the report as coming from both A & B…etc.

In other words, a cascade of poly-psyops operations supported by the repetition of compounded speculation. AKA: made-up news.

Naw. That would never happen.

But then, who knows the truth? For in all psyops – but particularly in poly-psyops – the truth can be very hard to certify.

Except, of course, in John Ernest’s briefings before the White House Press Corps (or is it Corpse?), where only the truth is spoken.

While I am, to point, mostly going with Trump, that is based on the promise of building the wall and returning. They won't be coming right back... not until checks... health, legal, etc. Oh, and that little bit about money for return. And yet I have serious doubts. Further, I think of Trump as a 60's or 70's Dem. Back when they were still pro-American, if sliding into communism. Socialism is just the msrp for communism, you know?

I expect he will do a lot of harm. But if he can be forced to do that one thing, and with even a 30 to 50 percent return of even recent illegals? America might have a chance. But I honestly don't trust him.

As for psyops? I don't think they'll really have to do much, and they will mostly be ignored. Besides, if anyone is going to damage Trump, it's going to be Trump. And I suspect he will. Their psyops is weak, compared to Trump's anyway. The man has talent in this arena, and they are toaster hippies playing with a wouldbe, couldbe, tyrant. It's almost like watching hillarity play with Putin.