The Two Giant Reasons the IRS is Investigating the Clinton Foundation

News recently broke that Hillary Clinton’s foundation is under IRS investigation, and at least part of that investigation centers on two companies.

This follows reports that Laureate Education and Uranium One have paid out (in the tens of millions) to the Clinton Foundation and in return have received immense taxpayer-funded benefits.

The Russian Atomic Energy Agency, Rosatom, purchased in January 2005 a Canadian company — UrAsia — with uranium stakes stretching from Central Asia to Western America, reports the New York Times. This purchase made the Russian agency one of the largest uranium producers in the world.

Leaders of the Canadian mining industry, who have donated in excess of $25 million according to the Clinton Foundation’s website, built and eventually sold the Russians the aformentioned company that is today known as Uranium One. 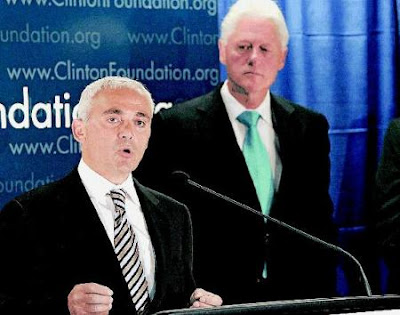 Before the Rosatom acquired the Canadian mining stakes, UrAsia had to obtain the vast uranium stakes it held at the time of the merger.

Shortly after the former president and Mr. Giustra visited the nation, the then embryonic UrAsia signed a preliminary contract “giving it stakes in three uranium mines controlled by the state-run uranium agency Kazatomprom.” Following this very private visit, Mr. Giustra donated some $31.3 million to the Clinton Foundation and five months later Mr. Giusta held a fundraiser for the joint Clinton Giustra Sustainable Growth Initiative where he alone pledged $100 million dollars.

UrAsia merged with Uranium One and almost immediately the new company began picking up uranium holdings in the United States. The company soon purchased in excess of 38,000 acres of across Texas, New Mexico, Wyoming, Utah, and other western states as well. Following this large acquisition, Uranium One stated it’s intent on making itself a “powerhouse in the United States uranium sector with the potential to become the domestic supplier of choice for U.S. utilities,” reports the New York Times.

Some $8.65 million dollars in donations were made to the Clinton Foundation by Uranium One and former UrAsia investors between 2008 and 2012.

The new rising global uranium conglomerate experienced a sharp and decisive blow when it’s stock fell 40 percent. Fearing the loss of their holdings in Middle East, Uranium One looked to the US embassy in Kazakhstan to negotiate for them with the nation’s officials, reports the New York Times. These discussions would have gone directly through Secretary of State Clinton, but the Clinton campaign did not respond to inquiries about this deal.

A few days after these negotiations, a subsidiary of Rosatom purchased “17 percent of Uranium One.” Not even a year later the Russian government offered Uranium One stakeholders a “generous offer,” that would give the Russian agency a “51 percent controlling stake.”

The US government had to sign off first, a decision that must go through the Committee on Foreign Investment in the United States, which includes executive members of the cabinet, the secretaries of the Treasury, Defense, Homeland Security, Commerce and Energy, and the secretary of state.

John Barrasso, a Senator from Wyoming where Uranium One had its largest operation, wrote President Barack Obama, saying it “would give the Russian government control over a sizable portion of America’s uranium production capacity.” During this time, a Russian bank that would assign a “buy rating to Uranium one stock” paid Mr. Clinton $500,000 dollars to speak in Moscow.

The decision had to go through the Committee, which included Secretary Clinton. At the time, her husband, in addition to the speaking arrangements, was “collecting millions in donations from people associated with Uranium One.” The Committee approved the deal in October of 2010.

The only reported Uranium Official to give to the Foundation was the chairman, Ian Tefler, who gave in 2007 less than $250,000. Mr. Tefler’s family charity the Fenwood Foundation, however, donated millions of dollars from 2009 to 2013, reports the New York Times.

The Committee approved sale of the Canadian mining stakes provided the Russians with direct control of “one-fifth of all uranium production” in the United States, reports the New York Times. While the Russians were taking control of Uranium One between 2009 and 2013, Canadian records highlight a “flow of cash made its way” into the pockets of the Clinton Foundation.

Rosatom took 100 percent stake in Uranium One in 2013 and shortly thereafter privatized the company.

The other company that could get Hillary into hot water is Laureate International Universities. Laureate hired former President Clinton for $16.5 million dollars over five years to act as their “honorary chancellor.” The company also donated between $1 and $5 million dollars to the Clinton Foundation, according to the foundation’s website.

While Hillary was Secretary of State and Bill was drawing a check from Laureate, the International Finance Corporation (IFC), invested $150 million into the company marking the largest single contribution the IFC has made in education. The largest contributor to the IFC is the US government, which during the same period contributed $55 million to the International Youth Foundation (IYF). Coincidentally, or not, the IYF, IFC, and the Clinton Foundation all participated in foundation programming.

The IFC also made a $150 million dollar contribution to a company owned by Frank Giustra.

“The Clinton Foundation board mainly consists of close friends, business colleagues and big donors to the Clintons,” Richard Pollock of TheDCNF reported.