A week after the Democratic platform committee approved what Bernie Sanders has touted as “the most progressive platform in history,” a number of editorials from over the weekend highlighted the ramifications of the Democrats dart to the left and echoed claims made by AR2 following the release of “The Sanders Manifesto” last week.

The New York Post noted the makeup of the party platform, claiming that Bernie Sanders and his supporters “won the war for the party’s soul,” and that while Hillary Clinton’s name is on the ticket, “the Sandersnistas are pulling the strings.” The Post also highlighted why this is a major problem for Hillary Clinton: 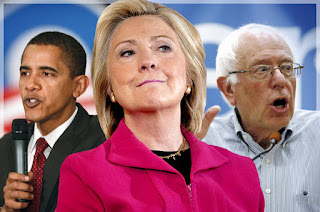 In short, this is a radical agenda that will present real problems for Clinton when she tries to woo moderates and independents who remain cool to her candidacy.

The Oklahoman’s editorial board called the platform, “a progressive agenda in overdrive,” and pointed out the various areas where the Democrat’s shift to the left will lead to disastrous policies:

In The Wall Street Journal on Wednesday, liberal columnist William A. Galston said the Democrats’ 2016 platform has tilted so far left that the party “is not Bill Clinton’s Democratic Party” and, “In important respects, it is not even Barack Obama’s Democratic Party.” Hillary Clinton is showing herself to be a perfect fit to lead it.

While The Washington Post editorial board tried to convey that platform was a victory for Clinton, even they were forced to admit Sanders’ significant impact on the platform:

Certainly, Mr. Sanders and the populist tone of this election year have had an effect on the Democratic ticket…Mr. Sanders also pressed for the party to support carbon pricing, the best policy to cut carbon dioxide emissions, in the platform. On the other hand, Ms. Clinton felt as though she had to flip against the Trans-Pacific Partnership — a strong deal that would cement U.S. influence in the Pacific Rim. Ms. Clinton also had to compromise her college affordability plan, which had been based heavily on channeling aid to the authentically needy, to write off tuition for a lot more students.

The consensus from these editorial boards confirms the dangers that exist in the Democratic Party Platform. Bernie Sanders and his allies crafted the platform in a way that is hostile to free enterprise and, as the party’s nominee, Secretary Clinton owns every one of these policies that go against what Americans have embraced for generations.

BREAKING: On The Daily Show with Trevor Noah, they edited a long interview with Michael Steele. Noah asked Steele if Hillary Clinton is qualified to be president, and Steele said that Clinton is absolutely qualified. Ugh. The editing was bad, but Steele gave them what they wanted.