Woman With Virtually No Accomplishments Makes History Or Something


There’s quite a bit of sqeeeing going on the news media over the nomination of Hillary Clinton to be the Democratic Party presidential nominee. It’s History! The New York Times says so

...Mrs. Clinton’s nomination — bringing women, barred first by law and then by custom, to the pinnacle of American politics — is to be celebrated as inspiration for young Americans, and as hope for women in nations and cultures that deny them the most basic opportunities. It is further proof that opening doors to women elevates and strengthens our nation.

Well, now, that’s interesting, because she has virtually no positive accomplishments over her time as a public figure. Quick, name one. Getting a bill renaming a federal center in NYC really doesn’t count much, does it? Let’s be honest: Hillary has ridden Bill’s coattails since he became governor of Arkansas. Call that sexist, call it misogynistic, the truth hurts. She was pathetic as a reverse carpet bagger senator, and was worse as Secretary of State. 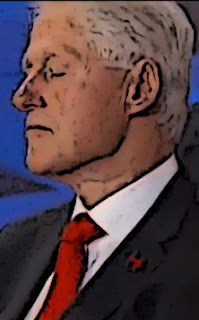 Of course, to point anything out and go against her is sexism

Some Americans remain deeply uncomfortable with women leading corporations, let alone the free world. No woman is more aware of this than Mrs. Clinton, who has struggled as first lady, senator and secretary of state to strike the right balance between what society expected of women and what she aspired to accomplish.

What is already clear is that Mrs. Clinton has had to work fiercely hard, under a withering scrutiny no male candidate would face, and that that hard work has now resulted in a profound service to the nation: A short time ago, the idea that a woman would attain her party’s presidential nomination was beyond audacious; it no longer is.

Yeah, no man with that bad a record, who is that unlikable and has a problem speaking to citizens outside of small gatherings would ever have trouble. Now that she is official (after having help from the DNC in spiking Bernie Sanders’ attempt), the compliant news media can frame all opposition as sexism.

Now over to the “straight news” at the Times, with this filed under “news analysis”. In other words, an opinion piece disguised

Hillary Clinton Asks Not for Trust, but for Faith in Her Competence

The trust of the American electorate remains out of her reach. Its affections still elude her.

So after 40 years in public life, Hillary Clinton grasped for something less lofty and far more attainable here on Thursday night: an unquestioned acknowledgment of her readiness for the job.

This all is pretty much repeated across the news media, you’ll get the same things at ABC, NBC, CBS, CNN, MSNBC, LA Times, etc. Hillary is utterly corrupt, incompetent, and soulless. She’s a big government statist who has no idea what the middle and lower classes go through. She wants to disarm law abiding citizens while having her own armed security for decades. She’s an unindicted felon who exposed national security for her own convenience. Her foundation is a criminal racket which spends just 10% on charity. She has no legislative record to speak of, and her time as Sec State saw the rise of ISIS, the disaster in Syria, support for Islamic extremists, and the rise of Russia, among others.

History is not always positive.

Anyway, her speech was agitated, hectoring, pandering, and robotic. There were catcalls and boos. Even Bill apparently found it boring.