Bob Woodward has unleashed the floodgates: liberal media is finally admitting the truth about the Obama administration's lack of respect for the freedom of the press.

In addition to Woodward, correspondents Lanny Davis, Bill Plante, Neil Munro, Ron Fournier, David Brody, Conor Friedersdorf, and others have expressed their concern and disbelief regarding the administration's fascistic mindset:

... “I had a young reporter asking tough, important questions of an Obama Cabinet secretary,” says one DC veteran. “She was doing her job, and they were trying to bully her. In an e-mail, they called her the vilest names — bitch, c--t, a--hole.” He complained and was told the matter would be investigated: “They were hemming and hawing, saying, ‘We’ll look into it.’ Nothing happened.” 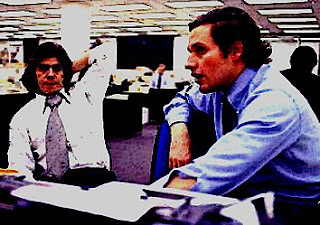 ...He wound up confronting the author of the e-mail directly. “I said, ‘From now on, every e-mail you send this reporter will be on the record, and you will be speaking on behalf of the president of the United States.’ That shut it down.”

...Another White House correspondent says that last week’s blowup over pool reporters’ access to the president’s golf game with Tiger Woods — which was none — is indicative of a larger problem. “Today’s a perfect example,” he says. “Jack Lew is sworn in” — as US Treasury secretary, on Thursday — “and they didn’t even allow a photographer in there. A reporter asked [press secretary] Jay Carney why, and his answer was, ‘It’s a family ceremony.’ No! This is a high-ranking government official whose salary is paid for by taxpayers. No.”

“This administration has tools to reach people on their own,” CBS White House correspondent Bill Plante said this week. "...they’re undercutting the First Amendment, which guarantees a free press through many voices. If they put out their own material, it’s state-run media..."

None of the White House correspondents who spoke to The Post are hopeful that things will improve. “What’s our recourse?” says one. “How do you force them?”

...For these reasons especially, Fournier is nostalgic for the days of covering Bill Clinton. “Every five or six days, he’d do a public event, and we’d go and yell questions and occasionally, he would answer,” Fournier says. “He had to be accountable to an a--hole like me. That’s healthy for democracy.”

Now that's a war on women.

Unlike Dick Nixon, the Obama administration wears its 'Enemies List' on its sleeve.

Now the press is as surprised as McCain, after the honeymoon? Oh come on, they had to see this coming. And it only cost them the American public... urhm, their real bosses. What was it they said in that one show? Ah, right.

I suppose, with the internet and a real understanding of things, they knew the gig was up and just wanted to do a nose dive for old statist glories? Or did they think the state would enforce their existence? Either way, they are truly done.

As Riddick would have said... Beautiful.

Dude, when somebody in the administration sends you an email like that, publish it. Unedited except to black out your email address.

The original story appears to have changed to remove the first part you quoted.

Ummmmm, the ' DC veteran' needs to be named and needs to go public with a copy of said email