"The Greatest Flood in World History": 100th anniversary of one of the nation's worst natural disasters

The week of March 21st through 26th marks the 100-year anniversary of one of the worst – and least talked-about - natural disasters in US history. During this week in 1913 a series of mighty storms tore through the Midwest, causing billions of dollars in damage and killing hundreds. From Nebraska to New York, and from Iowa to Louisiana, a large swath of the nation was hit by tornados, floods, rain, and snow.

First came the tornados which hit during the three day period of March 21st to the 23rd, 1913. Tearing through Mississippi, Georgia, Alabama, Nebraska, Iowa, Louisiana, Missouri, and Indiana, these storms killed over 240 people. The worst damage was done to Omaha, which had a tornado cut right through the middle of the city. The category F4 twister threw trees through houses and flung cars miles away. Once the storm had passed through the city, fires started to burn what little was left. In all, 115 people were killed and the city suffered over $8 million in damage ($187 million in today's dollars. 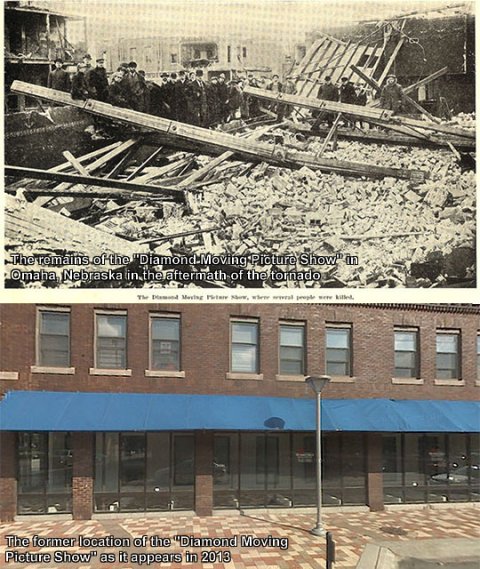 After the tornados had torn through the land, the rains came. Runoff from oversaturated watersheds like the Greater Miami in Ohio led to runoff which filled the rivers and streams of the Midwest until they began to overflow their banks. Levees, dams, and bridges snapped like twigs from the pressure of the raging waters. Cities and towns were swallowed whole by the flood waters.

Dayton, Ohio was the worst hit city of all, with over 14 square miles under water by March 26th. Some areas of the city simply vanished in up to 20 feet of water. The rushing waters tore houses and businesses from their foundations and took out miles of railroad tracks and bridges. The floods in Dayton ultimately caused 360 deaths and over $100 million in damage (over $2 billion in today’s dollars). 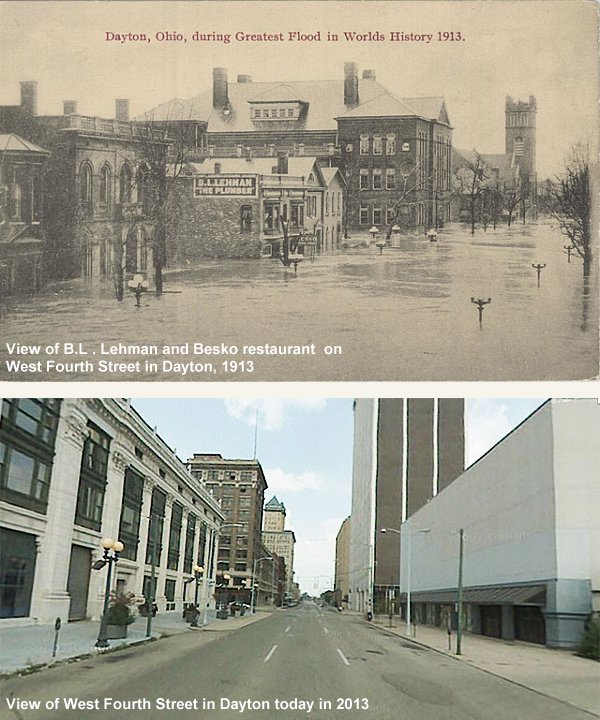 Peru, Indiana was another heavily flooded town during this week. The dam they constructed to prevent the flood waters from entering the city collapsed as soon as the waters hit it. Once the water started rushing into the streets the city was plunged into darkness as the electrical and gas plants were incapacitated by flooding. Once the citizens were rescued and deposited to one of two "islands" being used as refuge, many of them fell ill as diphtheria, measles, small pox, and mumps were all reported. 20 died in Peru from the flood, but many others died in the weeks after from these illnesses.

Cleanup efforts from the disasters took over a year in many cases, and the economies of cities like Dayton wouldn’t recover from the devastation for over a decade. 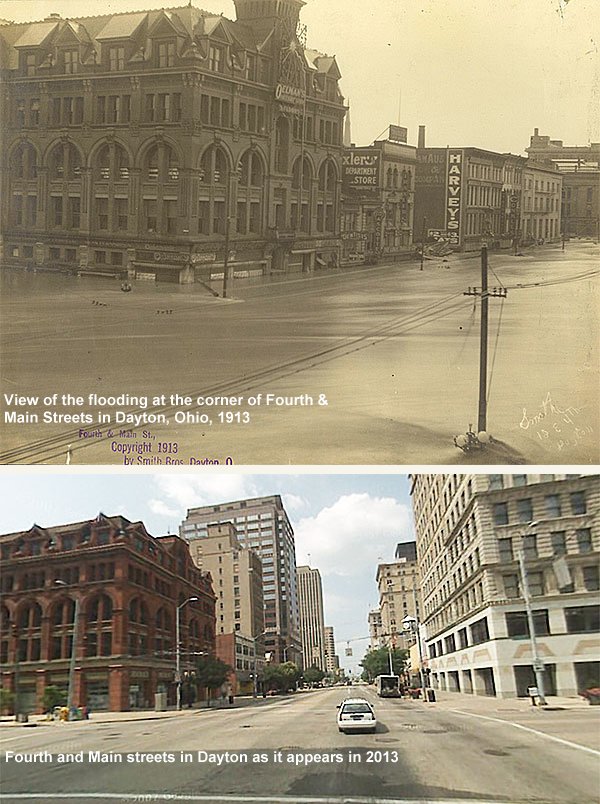 We’d like to thank some of the great archives and archivists who have done so much to work to help preserve the amazing history of the 1913 flood, including the Dayton Metro Library and historian Trudy Bell. The amount of history compiled at these two websites is truly amazing. Lastly, thanks to Jason from InsuranceTown.com, who lent us some of the resources we used to help prepare content for the web and publish our blog, and inspired our Mapping History Contest.

Don’t forget to check out HistoricNaturalDisasters.com for more images, and for information on our Mapping History Contest – help us figure out the locations pictured in historic photos from 1913 and you could win $100!