What could go wrong having a guy like Karl Rove -- who won a neat 1.3 percent of his elections last time around -- running a GOP "re-branding" effort? 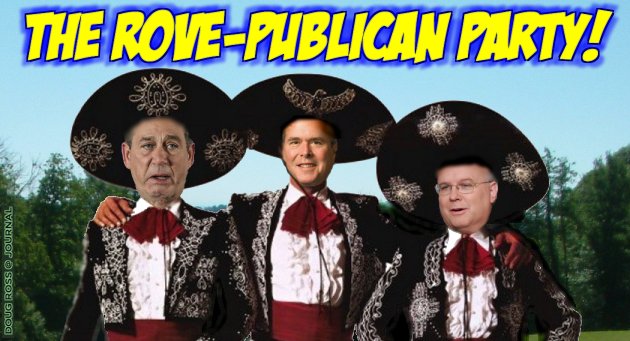 These nitwits need to go. Boehner and Rove may have hundreds of millions of dollars at their disposal, but they don't have us.

They were swept into power in 2010 on a tidal wave of Constitutional Conservatism.

And instead of embracing it, they spit on it.

The dinosaurs in the GOP need to go. Don't give the RNC a penny. Don't give American Crossroads a cent. Donate only to candidates who embrace First Principles, who adore the Constitution, and who readily admit our dire predicament.

Ted Cruz, Marco Rubio, and Rand Paul wouldn't be in the Senate if it weren't for us. We hold the power in this country. The government serves us, not the other way around. And Boehner, Rove, and the rest of the losers are anachronisms who can and should be ignored.

I read Jeb Bush on the subject of immigration. He makes a lot of sense. The other two I could do without.

i prefer rand paul and ted cruz and jess sessions.

We need to scare the DONORS, if they're gone Rove is done

Maybe something organized on the right can achieve this...

Rove is the P.T.Barnum of the Republican party. “Without promotion something terrible happens... Nothing!”

Yesterday, in a reply to an email, I wasn't nearly that kind to the RNC's Chris McNulty when he wrote, asking for money for their "every person counts" campaign:

"RNC's ideas are as old as its leaders. And they've proven that their own lust for power is preferred over individual freedom for the rest of us.

My blog is the first or second Google hit for "Fuck the GOP." Sometimes I feel bad about that. And then Boehner opens his mouth.

Not a nickel. You know not how to win a new generation because you don't promote the young cubs unless they've paid dues and sucked the dicks of the old lions. Fuck the RNC. Fuck the GOP. Take me off your list."

... but it's Lent, and I've forsworn politics, so really I was just answering some fan mail I guess. Sorry for the imprecations. Feel free to delete.

I am bombarded by RNC mailings, asking me for donations, or to renew my RNC membership, even though I had never joined them. One I tossed out today, was about making 2014 as momentous as 2010. They had nothing to do with 2010! It was Tea Party, nor RNC. They lost me years ago, when they supported Arlen Specter over Pat Toomey. Then Rove went to speak at La Raza event. Ever since I donate to men & women of my choice. West, Bachman, my very own Christie, Scott Brown, Ted Cruz & some other. Will never send a dollar to RNC.