The bedrock of Western Civilization is the family unit. That is, a man and a woman together forming a bond for the purposes of procreating and raising a family. The pairing of a man and a woman is the only way that the human species can perpetuate itself (various modern biotech and medical experimentation notwithstanding). And the notion that the law should provide formal recognition of this pairing is a concept that is centuries, if not millenia, old.

To insist that legal constructs recognize other types of unions -- based upon behavioral preference, religious belief, or genetic predisposition -- serves only to diminish the family unit. Once lawful status has been granted to same-sex marriage, where does this "right" end? Would polygamists someday lobby for their "civil rights"? Couples engaging in incestuous relationships? Perhaps progressives can outline for us the contours and limits on this new "right" as it pertains to marriage and the law. 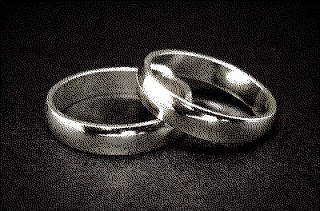 I can hear the critics now. "But, Doug," they might say, "That's ridiculous. You're conflating same-sex marriage with all sorts of other types of unions that no civilized society could endorse."

Perhaps so. But the state of California, just four years ago, voted overwhelmingly to reject same-sex marriage. Many observers say that it would pass today. In other words, societies morph. They change. But still they must operate under their existing legal frameworks.

Our framework, tattered though it may be by political infidelity, had its genesis in a moral certitude codified with the motto, "In God We Trust", which has appeared on United States coinage since the Civil War. To reject that framework is to reject the very principles that created our nation. The religious underpinnings of this nation's founding are indisputable. And those same Judeo-Christian principles have overwhelmingly refused to sanctify same-sex marriage.

Furthermore, to reject the legal protections offered only to the heterosexual family is to embrace collectivism. Simply put, arbitrary collections of individuals could claim to represent a family unit and demand such protections and benefits. Is this healthy for the civil society? Does it open the door to an ultimately destructive form of collectivism (e.g., "It takes a village")?

And for those who make the tangential claim that same-sex spouses deserve the health insurance benefits and other perquisites afforded their heterosexual counterparts, I argue simply that the federal government is responsible for the vagaries and distortions of our current health care system, not our concept of marriage. Every intrusive step taken by the government -- from employer-based coverage to Medicare's price controls -- has served only to make health insurance more expensive and treatment harder to find. In other words, just because the federal government broke the health insurance system doesn't mean that it can similarly deconstruct the family unit.

It truly is a case of "In God We Trust" versus "It Takes a Village". Which do you choose?

at 12:18 PM
Email ThisBlogThis!Share to TwitterShare to FacebookShare to Pinterest
Labels: Faith

IF SEX IS FOR PROCREATION, THEN ISN'T IT A MISNOMER TO CALL HOMO-EROTIC INTERCOURSE SEX?

DOESN'T IT ONLY SIMULATE ACTUAL SEX?

The "village" reference struck a nerve, reminding me of that since-resigned EPA official whose enforcement policy brought a world of hurt down on him. His strategy? The EPA, acting like conquering Romans, would invade American villages, "find the first five guys they saw and crucify them... then you know that town was really easy to manage." Of course he thought like this -- the guy who appointed him (Obama)﻿ thinks he's Caesar.

I know Hillary wrote the "Village" book, but in light of the Alinsky-like disciple we now have in the White House, that choice could also be framed as a case of "In God We Trust" versus "It takes a community... and its organizer."

It takes on new meaning when factoring in Alinsky's over-the-shoulder acknowledgment in Rules for Radicals "to the very first radical... Lucifer."

This is absolutely one of your better posts, Doug, and I'm proud to feel the same way.

Homosexuality is a condition that produces a desire. If you act on that desire, it is a chosen behavior. Just as a person that would like to steal something and choses not to is not a thief. I will not change my definition of marriage due to someones chosen behavior.