Thomas Perez, Obama Nominee for Secretary of Labor, Said to Have Lied Under Oath

Thomas "New Black Panthers" Perez is Eric Holder's Assistant Attorney General for Civil Rights and President Obama's current nominee for Secretary of Labor.  The President of Judicial Watch, Tom Fitton, has been on Perez like white on rice.

Of Perez, Fitton says, "[He] has shown a glaring inability to follow his sworn duties to tell the truth and dispassionately apply the basic constitutional tenet of equal justice under law." 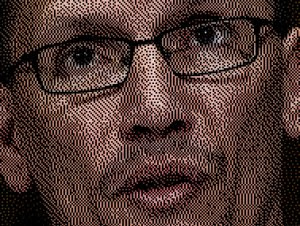 “Time and again in recent years, Judicial Watch has exposed Mr. Perez’s repeated attempts to undermine those seeking to assure that the laws of the land are applied equally to those of all races.  Mr. Perez’s attacks on election integrity measures such as voter ID were so far off base that he helped the DOJ earn a reputation as a partisan campaign arm for the Obama reelection campaign.

“As Secretary of Labor, Mr. Perez would be in a position to push policies broadly discriminate against American workers who failed to meet his own, thoroughly racialist worldview. Furthermore, based upon his relentless record both in and out of government, there can be little doubt that he would continue to put his personal preference for illegal immigrants above the rights of all workers of any race to equal employment opportunity.

“Mr. Perez is a terrible, hyper-partisan choice for Labor Secretary.  Honest Democrats and Republicans who want the Labor Department to be run well should look skeptically at his nomination.”

...Documents obtained from the Obama Department of Justice in a Freedom of Information Act (FOIA) lawsuit directly contradicted sworn testimony by Perez before the U.S. Commission on Civil Rights that no political leadership was involved in the DOJ decision to abandon its own voter intimidation lawsuit against the New Black Panther Party for Self Defense. The Black Panther Party had been charged with threatening and intimidating white voters outside a Philadelphia polling station on Election day 2008.

In July 2012, Judicial Watch obtained a ruling in the U.S. District Court for the District of Columbia that Perez had, indeed, lied under oath about the involvement of “political leadership” in the DOJ decision. In the ruling, Judge Reggie B. Walton declared:

“The documents reveal that political appointees within DOJ were conferring about the status and resolution of the New Black Panther Party case in the days preceding the DOJ’s dismissal of claims in that case, which would appear to contradict Assistant Attorney General Perez’s testimony that political leadership was not involved in that decision.”

The DOJ’s Office of Inspector General recently released a report entitled “A Review of the Operations of the Voting Rights Section of the Civil Rights Division,” which confirms the court’s ruling: “We believe that these facts evidence ‘involvement’ in the decision by political appointees within the ordinary meaning of that word,” and that Perez’s statements, “did not capture the full extent of that involvement.”  The report also documents that Perez does not believe in the race-neutral application of certain civil rights laws.

Also in 2012, Judicial Watch discovered that Perez may have colluded with St. Paul, Minnesota, officials to persuade the city to take the extraordinary step of withdrawing its cert petition from the Supreme Court docket in a case involving “disparate impact” discrimination. Documents obtained by Judicial Watch under the Minnesota Data Practices Act showed that St. Paul City Attorney Sara Grewing arranged a meeting between Perez, and Mayor Chris Coleman a week before the city’s withdrawal from the case, captioned Magner v. Gallagher. Following Perez’s visit, the city withdrew its case and thanked DOJ and officials at HUD for their involvement.

Documents and a staff briefing with the House Committee on Oversight & Government Reform revealed in September 2012 that, in exchange for St. Paul dropping its case before the high court, DOJ stopped two whistleblower claims against the city with the power to restore $180 million in violated HUD grants to the U.S. taxpayer.  The Wall Street Journal confirmed Judicial Watch’s concerns an investigation of its own and noted that the issues is “likely to get high billing” at Perez’s confirmation proceedings.

Perez is a former president of the board of Central American Solidarity Association of Maryland, CASA de Maryland, a group whose recent filings with the IRS describe its chief goals as  helping all people “participate and benefit fully” in American society, “regardless of their immigration status.” In opposing the Perez nomination, Senate Judiciary Committee Chairman Jeff Sessions (D-AL), described CASA, which was supported by Hugo Chavez, as “a fringe advocacy group that has instructed illegal immigrants on how to escape detection, and also promoted illegal labor sites and driver’s licenses for illegal immigrants.”

In other words, Thomas Perez is a radical, lawless hack wearing the costume of a government official.  His oath of office was a joke, a prank on all Americans.

He must be refused the consent of the Senate.  His employment must be terminated with extreme prejudice.

This is who Thomas Perez is: "A Radical Who Lied Under Oath About New Black Panther Party Case"
http://townhall.com/tipsheet/katiepavlich/2013/03/18/obama-appoints-radical-who-lied-under-oath-about-new-black-panther-party-case-to-head-labor-department-n1537241
The fact that Perez allowed baton-wielding New Black Panthers to walk is disturbing to say the least. Then again, the Inspector General uncovered a "rat's nest" in the DOJ, so it’s not inconceivable to think that Perez was just following Holder's marching orders... and with Obama's approval and a wink and a nod, already in the know that the Panthers would get a free pass.

Holder should have never been allowed to become our top law enforcement official -- he has always put race first and foremost above all else, including being an American. This was documented in the book "Injustice: Exposing the Racial Agenda of the Obama Justice Department" by whistleblower and former Obama DOJ official J. Christian Adams, where Holder's disturbing perspective on life was revealed -- that everything he sees is viewed through a prism of color. That mindset alone is grounds enough to warrant his immediate removal.

An excerpt from the book:
For much of his life, Attorney General Eric H. Holder Jr. carried around something peculiar…an old clipping of a quote from Harlem preacher Reverend Samuel D. Proctor. Holder put the clipping in his wallet in 1971, when he was studying history at Columbia University, and kept it in wallet after wallet over the ensuing decades. What were Proctor's words that Holder found so compelling? "Blackness is another issue entirely apart from class in America. No matter how affluent, educated and mobile [a black person] becomes, his race defines him more particularly than anything else."…When asked to explain the passage, Holder replied, "It really says that… I am not the tall U.S. attorney, I am not the thin United States Attorney. I am the black United States attorney. And he was saying that no matter how successful you are, there's a common cause that bonds the black United States attorney with the black criminal or the black doctor with the black homeless person."…It may seem shocking to hear these racialist views ascribed to America’s top law enforcement officer. But to people who have worked inside the Civil Rights Division at the Department of Justice, these attitudes are perfectly familiar.
http://www.theblaze.com/stories/new-book-sparks-controversy-over-obama-new-black-panthers/

It's important to note that the choice of Holder for AG, and Perez for Labor, are reflections of the president who nominated them. Barack Obama's close ties with the racist, anti-Semitic New Black Panther Party are well documented. Obama attended rallies, marched, and even shared podiums with them, and at least one of them has visited the White House as Obama's guest.

PJ Media's Bryan Preston: "The New Black Panthers are a radical Muslim black separatist group... Members of the group engaged in overt voter intimidation in 2008 in Philadelphia, and the Obama-Holder Department of Justice later dropped the case against them after it had won that case. The Panthers endorsed Obama in 2008, an endorsement that was posted on and later scrubbed from his campaign web site."
http://pjmedia.com/tatler/2011/10/03/photos-barack-obama-appeared-and-marched-with-new-black-panthers-in-2007/

Google "Shocking Photos: Barack Obama Appeared and Marched with New Black Panthers in 2007".
This is the kind of racist mindset that gives us Thomas Perez.

Our system of "checks and balances" is no longer checking or balancing. Our institutions are as corrupt and empty as the leadership we keep electing, over and over again.

I predict Perez will be confirmed after the usual posturing and live shot umbrage. We are too far gone now for anything but the failure of our soon to be totalitarian state.

HA !!!
A democrat caught lying???
Like finding out water is wet.

Look at the spineless republicans in the senate and tell he who has the guts to "just say no" on this guy.