The Hegemony of the U.S. Dollar as the World's Reserve Currency Coming to a Quick and Untimely End [Cary]

It’s happening incrementally – the unwinding of the U.S. dollar as the world’s reserve currency. We're seeing trading countries strike reciprocal alignments to exchange each others currencies and not deal in the USD. And it’s picking up speed. Not overnight – but the end of the USD’s dominance is coming faster than we’re prepared for as a nation. And the media is largely silent on the topic. Go figure.

Thanks, World Reserve Currency, But No Thanks: Australia And China To Enable Direct Currency Convertibility

Over the weekend, Australia appears to have come to the same conclusion, with the Australian reporting that the land down under is set to say goodbye to the world's "reserve currency" in its trade dealings with the world's biggest marginal economic power, China, and will enable the direct convertibility of the Australian dollar into Chinese yuan, without US Dollar intermediation, in the process "slashing costs for thousands of business" and also confirming speculation that China is fully intent on, little by little, chipping away at the dollar's reserve currency status until one day it no longer is. 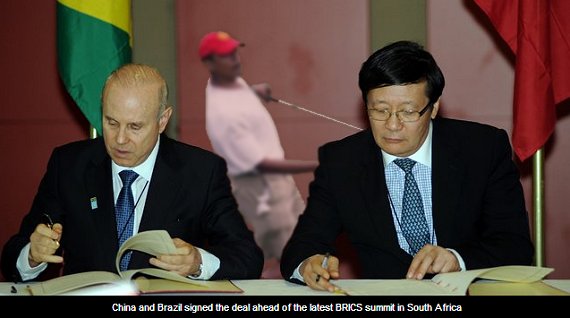 That said, this latest development in global currency relations should come as no surprise to those who have followed our series on China's slow but certain  internationalization of its currency over the past two years. To wit: "World's Second (China) And Third Largest (Japan) Economies To Bypass Dollar, Engage In Direct Currency Trade", "China, Russia Drop Dollar In Bilateral Trade", "China And Iran To Bypass Dollar, Plan Oil Barter System", "India and Japan sign new $15bn currency swap agreement", "Iran, Russia Replace Dollar With Rial, Ruble in Trade, Fars Says", "India Joins Asian Dollar Exclusion Zone, Will Transact With Iran In Rupees", and "The USD Trap Is Closing: Dollar Exclusion Zone Crosses The Pacific As Brazil Signs China Currency Swap."

Last week, it was China and Brazil.

China and Brazil have agreed to trade the equivalent of up to $30 billion per year in their own currencies, moving to take almost half of their exchanges out of the dollar zone.

The three-year swap line agreement, signed before the start of a BRICS nations summit in South Africa, marked a step by the two largest economies in the group to change global trade flows long dominated by the US and Europe.

It was suggested as a goal early in the first Obama term when Tim Geithner let it slip (then backed off) that it wouldn’t be a bad thing to happen.