As Weasel Zippers observes, "Because only 15 of the 19 hijackers on 9/11 came from the Wahhabi kingdom:"

Special Travel Benefit for Saudis a "Slap in the Face" 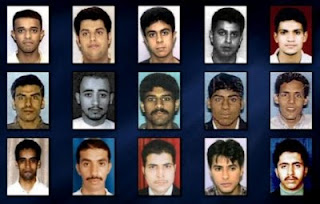 Saudi Arabia, the nation which produced 15 of the 19 hijackers in the 9/11 attacks, is about to become one of a handful of countries whose travelers can bypass normal passport controls at major U.S. airports. Sources tell the Investigative Project on Terrorism (IPT) that this will mark the first time that the Saudi government will have a direct role in vetting who is eligible for getting fast-tracked for entry into the United States.

An agreement to accept Saudi Arabian applicants into the Global Entry trusted traveler program drew little notice when it was announced in January. Now, some officials question why the country merits such a benefit – which is similar to a theme park “fast pass” to avoid long lines – when other allies like Germany and France are not yet included...

Travelers approved for the program can skip the normal Customs and Border Protection (CBP) lines starting next year and enter the country after providing their passports and fingerprints at a kiosk. Only Canada, Mexico, South Korea and the Netherlands currently enjoy the benefit...

Would that the White House have as much concern for our military personnel:

Transportation Security Administration inspectors forced a wounded Marine who lost both of his legs in an IED blast and who was in a wheelchair to remove his prosthetic legs at one point, and at another point to stand painfully on his legs while his wheelchair was examined, according to a complaint a congressman has registered with the TSA. 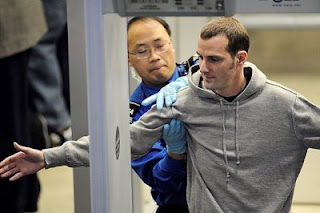 Rep. Duncan Hunter said in his letter Monday that the Marine, who is still on active duty and showed TSA agents his military identification, was still forced to undergo that scrutiny.

“A TSA office asked the Marine to stand and walk to an alternate area, despite the fact that he physically could not stand or walk on his own. With numerous TSA officers sitting and unwilling to assist, an officer then made him remove his legs, then put them back on, only to advance to a secondary screening location where he was asked again to stand, with extraordinary difficult, while his wheelchair was examined for explosives,” Mr. Hunter said.

He also said TSA officers initially directed the Marine to the wrong line, then made him move lines but made no effort to help him. The incident occurred at Phoenix’s Sky Harbor airport last week, as a group of Marines was returning to San Diego.

Mr. Hunter included two photos of the inspection in his letter that appear to show a TSA agent patting down the Marine’s arm and examining the prosthetic leg.

It's all about priorities with this administration.