As the first Nobel Peace Prize winner to direct the killings of over 4,700 individuals using drone-based warfare (including children, if the Puffington Roast is to be believed) and to reverse himself on a missile defense shield, President Obama added another feather to his hawk cap this week:

The United States is flying nuclear-capable B-52 bombers on training missions over South Korea to highlight Washington's commitment to defend an ally amid rising tensions with North Korea, Pentagon officials said Monday. 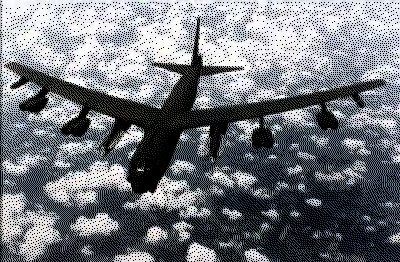 Pentagon press secretary George Little said one B-52 flew over South Korea on March 8, and the deputy defense secretary, Ashton Carter, said during a visit to Seoul that another bomber mission is scheduled for Tuesday.

B-52 bombers are capable of launching nuclear-armed cruise missiles, but Little said those participating in the Korean exercise are not armed with nuclear weapons... the Pentagon used the occasion to draw attention to the role B-52 bombers play as part of an American nuclear "umbrella" over South Korea and Japan - both of which feel threatened by North Korea's development of nuclear weapons and ballistic missiles.

In a more dramatic demonstration of that concern, Defense Secretary Chuck Hagel on Friday announced that the U.S. is beefing up its defenses against a potential North Korean missile attack on the U.S. He said that over the coming four years the Pentagon will add 14 missile interceptors to the 26 it already has in place at Fort Greely, Alaska, at an estimated cost of $1 billion.

Obama's reversal on a missile-defense shield is particularly troubling. As The Wall Street Journal puts it, his about-face represents a "A tacit admission that the U.S. will soon be vulnerable to attack."

I tweeted your article, Doug. It deserves wide distribution.

But, but, the Admiral said global climate change was the number one threat.

Planes haven't been grounded because of the sequester?

isn't the goal to make the sequester as painful as possible?

I think it is timely to remind Senators Boxer and Feinstein of their long-running opposition to missile defenses on the West Coast of the US.

Have they done a good job defending Californians?