...my new faith can be understood as follows:

1. Government allocates capital better than the private sector, and should use interest rates, exchange rates, price fixing, price controls or whatever artifice it deems fit to ensure that capital goes to where it is properly directed.

2.. The alpha and omega of the central bank’s proper role is to finance government spending. 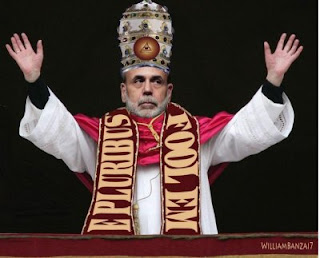 3.. Money belongs to the government, as we have seen properly demonstrated this week in Cyprus.

4.. Property rights, the antediluvian obsession of the market fundamentalists, have been subject to a doctrinal revision “the template” as also shown this week in the eastern Mediterranean.

5.. As a result of this new paradigm, asset prices must rise for the foreseeable future so long as Heli I decrees that the money printers keep printing. How can asset prices fall while the US central bank is printing more than $80bn a month? Even the unreformed Bundesbankers will surely grasp that if the European Central Bank did the same thing, the euro's problems would disappear overnight and prosperity would swiftly return to southern Europe, (Really, Germans should not be allowed into politics until they have had a primer indoctrination at either Cambridge or Princeton.)

7.. Services or goods provided to the population by the government, borrowing money from the central bank to pay the fellows who produce the goods that nobody needs with money that does not exist, will add tremendously to the GDP. This is a sure sign that the right policy is being pursued.

8.. These goods and services anyway have a higher moral value than the ones produced in the private sector. One should simply compare the "social usefulness" (a favorite notion of Lenin and Stalin) of a nurse versus a hedge fund manager to be convinced. I rest my case.

So from now on, I will buy what the US, UK, French, Spanish, or for that matter Greek governments and central banks tell me to buy. I cannot afford to offend the new clergy. As a market “intellectual” the risks to my social standing, not to mention career prospects, are too high. One day if I keep my nose clean and my thoughts pure, I may just be admitted to the College of Cardinals.

Pity there's no separation of this church and state.