A tweet from our genteel, enlightened and erudite president

All class, as usual. 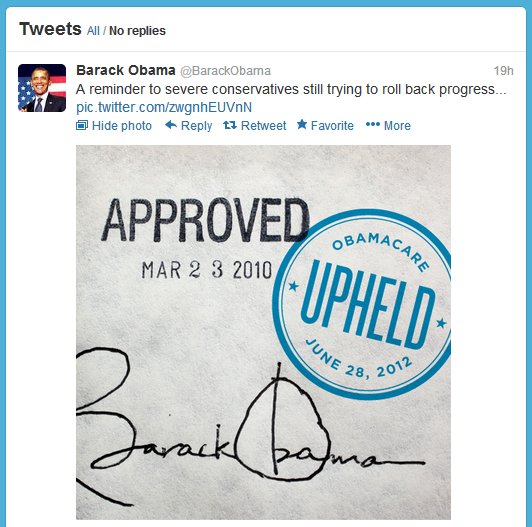 Which reminds me of this diagnosis:

Narcissistic Personality Disorder involves arrogant behavior, a lack of empathy for other people, and a need for admiration-all of which must be consistently evident at work and in relationships. People who are narcissistic are frequently described as cocky, self-centered, manipulative, and demanding. Narcissists may concentrate on unlikely personal outcomes (e.g., fame) and may be convinced that they deserve special treatment...

I left a bunch of questions at Obama's tweet. I urge everyone else to do so as well.

If you
ook at the O in Obama you'll notice that It starts and stops quite a few times. He draws a portion of the O, stops, draws another portion, stops again, and continues on with this until the entire O is compleated. I think this could be more important than the narcissistic personality.

I remember reading where multiple stops and starts like this, in handwriting, is a sign of brain damage.

If you combine this with other things, like 57 states, his "sons", writing the wrong year, in the visitor's book, when visiting Queen Elizabeth, his extensive, unexplained head scars, and his sometimes bizzare behaviour where his actions are those of a 12 great old, it makes one Wonder if there isn't some sort of major brain damage that happened sometime before he became president.

I wonder what a professional hand writing expert would say about that capital 0 and the apparent difficulty that Obama had while writing it.