How much more of this lawless insanity will New Yorkers tolerate?

There’s no Jessica’s Law in New York. Child pedophiles get shorter sentences than this...

But if you are George Bardwil and you are trying to protect yourself and your home, you face three years in jail because [your] gun was ‘unlicensed.’ George Bardwil allegedly pulled a .40-cal. Sig Sauer on the burglar. Without firing any shots, the burglar ran away like a little coward and Bardwil saved his home and himself. So what’s his reward? Possibly three years in jail. 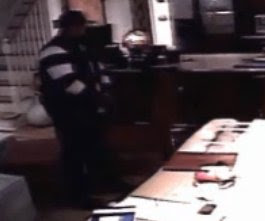 A Manhattan millionaire faces three years in jail for drawing an unlicensed gun on a burglar inside his home.

George Bardwil, who owns linen company Bardwil Home, was in his E Street apartment when an intruder came into his home in January... Bardwil, 60, threatened the intruder with a loaded .40 cal Sig Sauer. The man fled and Mr. Bardwil called the police.

After showing the cops footage from his home surveillance cameras, they arrested him under suspicions of owning an illegal firearm... “There’s no dispute that George was being burglarized,” [his lawyer] said. “George had been the victim of multiple burglaries, and the DA’s office concedes that it was used in self defense.”

How many lawyers, politicians, judges and media hacks does it take to understand the Second Amendment?

it is an evil system that demands and expects the innocent to just lay down and die. bloomberg has all his armed guards but demands a system that says your life is forfeit to any passing violent thug.

this guy needs to take it to the supreme court that his right to own a gun should not be infringed. either it means what it means or we are serfs who continue to live only at the whim of people like bloomburg and fienstien and shcummer

I bet he voted for Bloomberg even after Bloomberg voiced the people-voted term limits.

They have the gov't they want and that gov't doesn't want them to own guns.

I have no sympathy whatsoever.

Ummm,
...even after Bloomberg voided...

"A Manhattan millionaire faces three years in jail for drawing an unlicensed gun on a burglar inside his home."

This happened in England YEARS ago that a guy pulled a shotgun(at the time illegal to have in your house) on a burglar and he killed him he was chraged and CONVICTED of manslaughter!!!!!! But, I'm sure that could never happen here in america WAKE UP PEOPLE!!!!!!!!!

Molon Labe for me, but not for thee.

Veeshir, Does it say somewhere that this guy voted for Bloomberg?

John, are you with Occupy Wall Street, or just a run-of-the-mill Class-Warrior?

People are talking a lot about how they'll defend their 2nd Amdt Right to the death; but not their NEIGHBORS' right .... screw them, they deserve it.

This every-man-for-himself style of Molon Labe has a pretty predictable end. Fifty million dead patriots who all committed suicide-by-cop, each to defend HIS OWN rights.

A whole slew of internet badasses who will whine and moan about how nobody would come to your aid when they came to confiscate your guns.

But, for now, just sit back, be content to feed your fellow Americans to the crocodile in the hopes that it eats you last.