Every. Single. Prediction. Every single one by the Climatards (which is the term they prefer, I hear) has turned out wrong, but none as spectacularly as this:

No, the world isn't getting warmer (as you may have noticed)... [and] official predictions of global climate warming have been catastrophically flawed ... the ‘scientific basis’ for [reshaping the] economy and spending billions in taxes and subsidies in order to cut emissions of greenhouse gases... 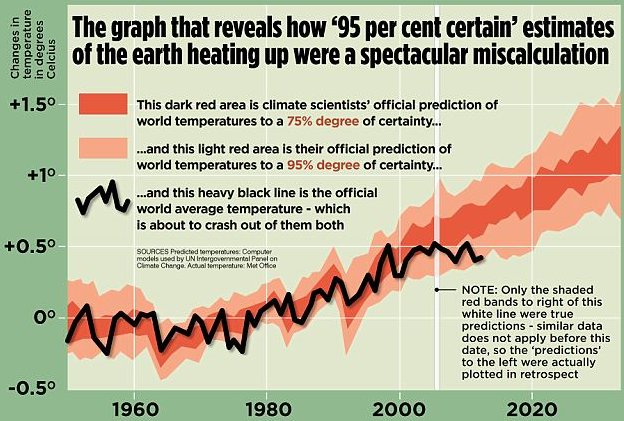 The estimates – given with 75 per cent and 95 per cent certainty – suggest only a five per cent chance of the real temperature falling outside both bands.

But when the latest official global temperature figures from the Met Office are placed over the predictions, they show how wrong the estimates have been, to the point of falling out of the ‘95 per cent’ band completely...

The graph shows in incontrovertible detail how the speed of global warming has been massively overestimated. Yet those forecasts have had a ruinous impact on the bills we pay, from heating to car fuel to huge sums paid by councils to reduce carbon emissions. 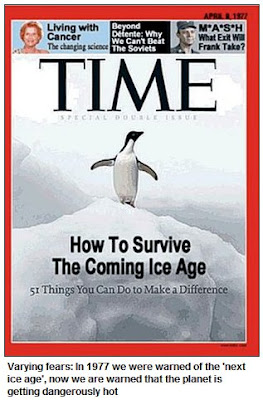 ...Academics are revising their views after acknowledging the miscalculation. Last night Myles Allen, Oxford University’s Professor of Geosystem Science, said that until recently he believed the world might be on course for a catastrophic temperature rise of more than five degrees this century... But he now says: ‘The odds have come down,’ – adding that warming is likely to be significantly lower... Prof Allen says higher estimates are now ‘looking iffy’.

...The graph confirms there has been no statistically significant increase in the world’s average temperature... Its source is impeccable. The line showing world temperatures comes from the Met Office ‘HadCRUT4’ database, which contains readings from more than 30,000 measuring posts. This was added to the 75 and 95 per cent certainty bands to produce the graph by a group that amalgamates the work of 20 climate model centres working for the IPCC.

...In the Seventies, scientists and policymakers were just as concerned about a looming ‘ice age’ as they have been lately about global warming – as the Time magazine cover pictured here illustrates... Temperatures had been falling since the beginning of the Forties. Professors warned that the trend would continue and food crises were going to get worse because of shorter growing seasons.

Newsweek magazine reported that evidence of cooling was so strong ‘meteorologists are hard-pressed to keep up with it’. But, it lamented, ‘scientists see few signs that government leaders anywhere are even prepared to take the simple measures of introducing the variables of climatic uncertainty into economic projections’. It said the planet was already ‘a sixth of the way towards the next ice age’.

While recently every kind of extreme weather event has been blamed on warming, in the Seventies the culprit was cooling. One article predicted ‘the most devastating outbreak of tornadoes ever recorded’, along with ‘droughts, floods, extended dry spells and long freezes’...

The recent leak of the Climategate 3.0 emails offers additional evidence that global warming is about as genuine as a mother-in-law's hug.

Not that any evidence would dissuade the lawless extremists at the EPA.

Come on Doug you know Global Warming is actually causing Globally Cooling. I mean I'm sure The Goracle has stated this numerous times.