WHOA: Mobile Apps Business Expected to Be Double the Size of the Entire Movie Industry... This Year

I really had no idea that revenues from the mobile app business will hit about $25 billion this year -- roughly double the revenue of every movie theater in America. 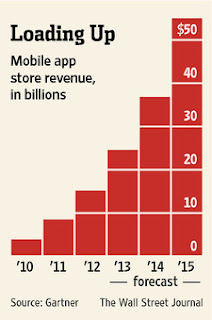 ...The global apps business is expected to make $25 billion in revenue this year, up 62% from a year ago, according to Gartner. To put that in perspective, movie theaters sold less than half that dollar amount at the box office in 2012.

Yes, business is booming. But it’s also unpredictable. About 63% of the apps used daily now differ from those used daily a year ago. Our attention span is so short these days – and the competition is so fierce – that we soon move on to the latest and greatest app.

On average, we only focus on about eight apps at a time. And we use these apps more than you might think: The average smartphone user spends two hours a day with apps, more than double the time spent two years earlier... 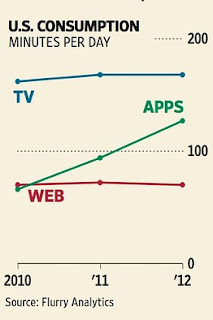 ...Where did we find all this free time?

It’s hard to say exactly — if you look at the following graphic, the amount of time watching television and surfing the Web is flat in the past couple of years. Of course, we often have apps running in the background, like music-streaming apps, allowing us to multitask.

So consumption of apps is catching up to television viewing – some might say that’s a good thing, that apps are more productive than watching “Keeping Up With the Kardashians.”

...But, as the following graphic shows, productivity apps capture just 2% of our time. Rather, games are stealing the most of our attention...

...43% of our time is spent catapulting angry birds at pigs and fighting monsters...

Thinking about developing your own mobile app? Have at it, but recognize that the odds are long.

Only five of the top 250 app publishers in the Apple Store are "virgins", the rest are reported to be veteran development shops. Electronic Arts, for instance, has dozens of bestselling apps and a marketing budget to match.

But a single good idea -- likes Tetris or Angry Birds, for instance -- can change the game. In truth, it's never been easier to write a software bestseller.