How many wars have been fought and tens of thousands of Israeli lives lost fighting for the tiny strip of land that is the last bastion of Western Civilization in the Middle East? Not enough, it would seem, for the Obama administration that has decided to travel back in time to the early 20th century.

The map of the Middle East displayed in an Obama administration video released days before President Barack Obama’s visit to Israel shows the Jewish state dispossessed of substantial parts of its current territory, including its capital.

The map of Israel, displayed repeatedly during the video, shows the Golan Heights, Jerusalem, northern Israel, and areas surrounding what is currently the West Bank as non-Israeli territory... 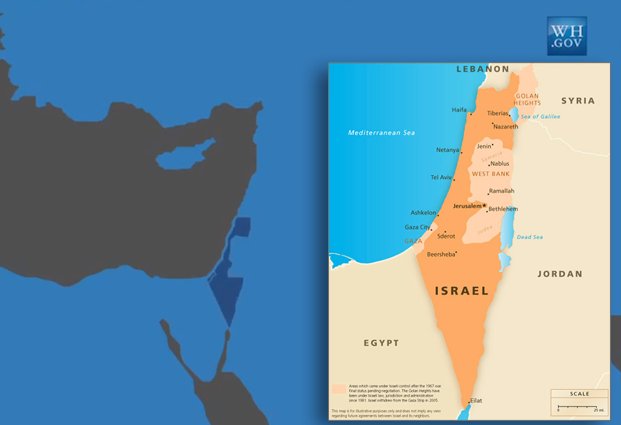 The president’s schedule lists two stops in “Tel Aviv, Israel” and one in “Amman, Jordan” but his activities in Israel’s capital city are identified as taking place only in “Jerusalem” — with no country name attached.

If the Obama administration wants to return the Middle East borders to those of the early 20th century, I say: let's start with Saudi Arabia!

I think Israeli officials should respond by referring to Mr Obama's home state as the "Kingdom of Hawaii", and perhaps asking him how he can be president of the United States when he was born in a foreign kingdom.

All of us have to try to live out the remaining 46 (ugh..!) months of this mistake. Libbers trying to get more of their 60's agenda enacted; conservatives trying to keep the flood waters at bay as best they can; China, Russia, et al hoping to push the advantage of a weak US leader; Europe, Israel, Thailand, etc hoping to survive a weak US leader; and Islamic radicals (oops, redundant-) trying to kill as many Americans as they can before the US rediscovers its gonads...