500 "Youths" That Could Have Been Obama's Kids Rampage Through Chicago's Magnificent Mile, Assault Shoppers and Police

The warmest day of the year so far brings hundreds of mischievous teens to Michigan Avenue... [But] Police are calling it ‘mob action’. 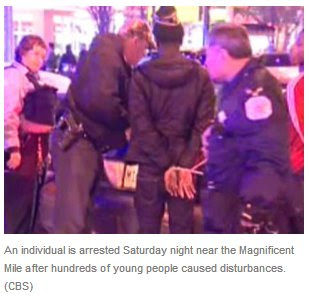 CBS 2 is learning about multiple incidents in at least four different locations along the Magnificent Mile and in the Gold Coast, yielding a slew of arrests.

Things got pretty bad, very quickly with many innocent shoppers and tourists caught in the middle of a very chaotic situation... Hundreds of teens littered Michigan Avenue and State Street near Chicago... Things started to go bad around 6:00 p.m. Saturday, with teens purposely bumping into people, and causing fights among themselves.

... “You had a group of teens, close to maybe 500. They assaulted a Chicago police officer that was on a mounted on a horse and all of a sudden they assaulted a citizen walking the streets, just a normal citizen shopping and enjoying the weather,” said [an eyewitness].

Later that night, a man was attacked around 10:45 p.m. while walking near Chicago and Dearborn. Sources tell us he was jumped and punched in the face by a group of teens. He was taken to Northwestern Memorial Hospital.

In a separate incident, a group of woman say they were attacked by a mob of girls on the CTA Red Line. The women reported a robbery once they got off the train at the State and Monroe station. Eleven females were arrested—10 juveniles and one adult—and charged with battery. Two of the teens were charged with strong- armed robbery.

According to commenters at Chicago police blog Second City Cop, not only isn't national media covering the story, even the local media isn't telling the whole story: 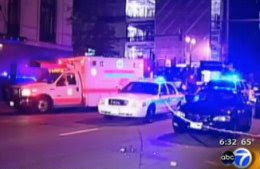 TOURISTS BEWARE: You are not getting the whole story. I was coming home from work at 7:30. The savages were randomly attacking people. Go to Woodfield if you want to shop. Chicago is not safe.

You'd think such vicious racially motivated hate crimes would receive wide-spread national media attention, but they don't. As a rule, reporters and prosecutors ignore the racist motivations of black-on-white mob attacks. In news articles like this one the thugs are invariably described only by their age -- "kids" or "teenagers" -- while any mention of their race is studiously omitted, as if it had nothing to do with the crimes.

In related news from gun-free Chicago, "2 dead, 20 wounded over the Easter weekend."

Thank goodness law-abiding citizens can't defend themselves in Chicago. Some of those poor "youths" might have been hurt.

Chicago, like Detroit, represents Democrats' policies writ large: as with the Motor City, we are witnessing the breakdown of the civil society, brought to you by secular immorality, unfettered redistribution of wealth from makers to takers, and incentivizing the single-parent family.

But don't worry, folks: if Michelle Obama has her way, at least the "youths" who attack you during your next shopping trip won't be obese.

Anonymous said...
This comment has been removed by a blog administrator.
5:56 PM

LOL! Now rioting blacks are called "mischievous teens". And what shenanigans did these mischief makers get into? Battery, Strong Armed Robbery, Reckless Conduct. In general, beating, robbing and terrorizing white people. Good reporting CBS, you made it through the entire story while hiding the race of the "mischievous teens" and the victims.

Maybe it's time for the City of Chicago to adapt some strict gun control laws.

This is the kind of issue a president (of any color) should be out in front of.
Then again, our feckless "leader" was silent during the rash of "flash mob" violence.
http://violentflashmobs.com/

"Why does mainstream media continue to keep their lips zipped about this subject?"
http://shar.es/dcXqr

500 "mischievous" teens, randomly assaulting people on the street. This is the answer to the question of why one might need 30+ round magazines.

It is obvious that PC preferred groups like Muslims and blacks can do no wrong, whereas those whom they attack have always provoked their rancor in one way or another.

The Truth is anathema! This is the New Normal.

The saddest part of course, is that had the groups been mainly white youth attacking blacks, the media would not have hesitating to report on it - race and all.