Illinois Representative Jan Schakowsky is a known Marxist sympathizer. Her history makes clear that she despises the United States Constitution and that the oath she took to serve in Congress was as bogus as a George Soros 9-dollar bill.

And thanks to Jason Mattera's hidden camera, Schakowsky once again revealed her inner tyrant. This time she was caught admitting that the Democrats' real agenda is shredding the Bill of Rights, thereby setting the stage for a hard tyranny.

Rep. Jan Schakowsky (D-IL), a member of the Democratic Party’s leadership in the House of Representatives, suggested to Jason Mattera at a Feb. 13 women’s rights rally that plans for an assault weapons ban and private-sales background checks were only the beginning of a broader gun control agenda extending to handguns as well.

...Schakowsky: We’re on a roll now, and I think we’ve got to take the--you know, we’re gonna push as hard as we can and as far as we can. 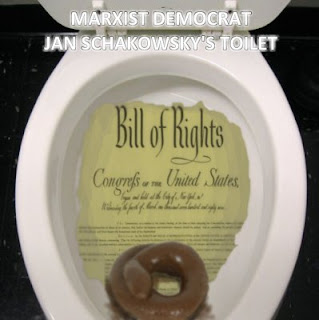 Mattera: So the assault weapons ban is just the beginning?

Schakowsky: Oh absolutely. I mean, I’m against handguns. We have, in Illinois, the Council Against Handgun... something [Violence]. Yeah, I’m a member of that. So, absolutely...

Mattera: We’ll never get a handgun ban with the Second Amendment as stated.

Schakowsky: I don’t know. I don’t know that we can’t. And there may be an allowance, once again, for communities--I have communities in my district that prohibited handguns within their borders. The rights of municipalities and states to view that as a sensible way to keep people safe--I don’t think it’s precluded...

When Mattera asked why legislators were not pressing for a handgun ban, given that most murders are committed with handguns, Schakowsky replied: “Because we’re not going to be able to win that. Not now.” She went on to explain why background checks were a useful interim policy, arguing that they would “address any kind of weapon.”

Schakowsky’s remarks about plans for broader gun control are not the first time she has revealed the long-term goal behind short-term policy debates. She has a tendency to do so when speaking to apparently sympathetic audiences. In 2009, she told a crowd that the goal of Obamacare would be to “put the private insurance industry out of business.”

Any self-described "progressive" (i.e., socialist) serving in Congress is an enemy of the Constitution. In a sane society, such a person would be ejected from government for violating their oath of office.