This is government-sponsored theft, plain and simple. And it is a sign that the civil society is unraveling in Europe.

In a move that could set off new fears of contagion across the eurozone, anxious depositors drained cash from ATMs in Cyprus on Saturday, hours after European officials in Brussels required that part of a new €10 billion ($12.6 billion) bailout must be paid for directly from the bank accounts of savers. 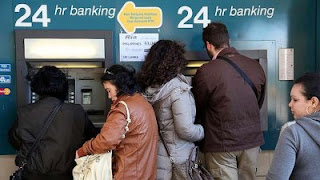 The move - a first in the three-year-old European financial crisis - raised questions over whether bank runs could be set off elsewhere.

Jeroen Dijsselbloem, president of the group of euro-area ministers, on Saturday declined to rule out taxes on depositors in countries beyond Cyprus... Although banks placed withdrawal limits of €400 on ATMs, most of them had run out of cash by early evening. People around the country reacted with disbelief and anger... ''This is a clear-cut robbery,'' said Andreas Moyseos, a former electrician who is a pensioner in Nicosia, the capital...

...[The seizure] came with almost no warning at the beginning of a three-day religious holiday... Under an emergency deal reached early on Saturday in Brussels, a one-time tax of 9.9 per cent is to be levied on Cypriot bank deposits of more than €100,000 effective on Tuesday, hitting wealthy depositors - mostly Russians who have put vast sums into Cyprus's banks in recent years. But even deposits under that amount would be taxed at 6.75 per cent, meaning that Cyprus's creditors will be confiscating money directly from pensioners, workers and regular depositors to pay off the bailout tab...

This is an idiotic step and one that could trigger bank runs throughout Europe.

Oh. And think it can't happen here? There are steps that our own federal government is taking that say otherwise.

Steps are already being made to where this is a definite possibility in the future. How?

The Socialist ideal of a world without cash, where monetary transactions of any type are made electronically.

Such transactions require the rounting number of your bank and your account number.

Now you may say no it can't happen. But salary payments by companies via paper check are becoming rare today, one gets a stub detailing the ETF payment that was deposited into your account. Or IRS refunds, they are planning to eventually go to ETF only.

The ruse is they want to go "paperless" and save money, but once they have you bank routing information and account number they have access to your account. So they can giveth and can taketh away from your bank account, unless you have the patience and fortitude to make you account a sweep account and put the majority of your money into another account or into a non-ETF form.

”The American Republic will endure until the day Congress discovers that it can bribe the public with the public's money”. Alexis de Tocqueville

The Government is out of control, it can simply seize money and property to buy the votes of the Dumbmasses.

When the Feral government can simply steal our property and hand it out as a bribe then the only way to halt the process is to not produce that property in the first place.

It is time that we began going on strike to starve the beast.

It is time that the folks who pay the bills show the powers that be what will happen if they continue on this treacherous path to tyranny.

We are running low on peaceful solutions to this problem – Going on strike is one of the last.

It is time that the real taxpayers stop funding their own enslavement.

There needs to be some General Strikes by the taxpayers starting with T-Day itself: April 15, 2013.