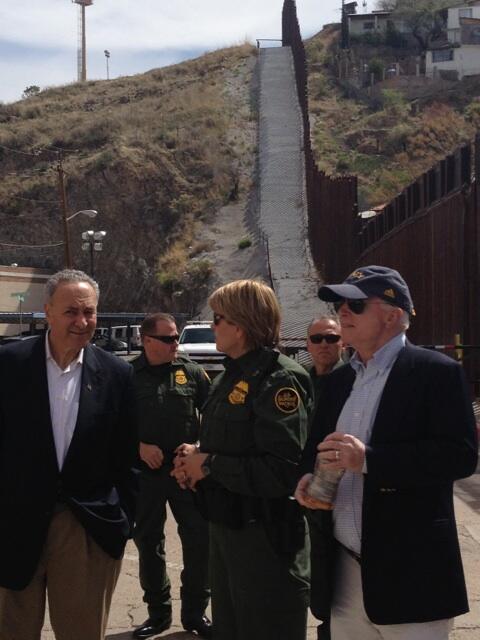 • Napolitano Expects Fees to Cover Immigration Reforms: "[The DHS head] said the costs of some of the key reforms backed by the administration would not be borne by taxpayers, but by the immigrants who opt to pursue any new pathway to citizenship enacted into law..."

• Most Illegal Immigrant Families Collect Welfare: "Census Bureau data reveals that most U.S. families headed by illegal immigrants use taxpayer-funded welfare programs [and even] before the recession, immigrant households with children used welfare programs at consistently higher rates than natives."

Napolitano says "Border is secure as its ever been" ignoring the fact that CBP is about to cut manpower at least 20%. hotair.com/archives/2013/…

• Obama Leaves Border Open and Guardless After Sequester: "The border is about to become 25% less secure. Agents will no longer work a full ten hour shift. Thereby leaving the border unattended, naked, for up to two hours at a time during each shift change."

As if to highlight this egregious and criminal behavior, an illegal alien climbed an 18-foot fence right in front of the nitwit "Gang of Schmucks" (which is the phrase they prefer, I hear) who happened to be visiting.

Just witnessed a woman successfully climb an 18-ft bollard fence a few yards from us in #Nogales twitter.com/SenJohnMcCain/…

By the way, the fact that illegals can waltz into the country without any sort of scrutiny does not mean you can fly from Dallas to Des Moines without getting a fondlectomy.

Fondlectomy? Doug, you need to get a grasp on things.

Where are the Congressional Republicans? Articles for impeachment are everywhere.

I don't believe this "jumped the [dang] fence" story from McLame. These two Schumucky and Mc are on the border, for a publicity stunt and some photos. . . . and nobody has a video or picture of this women vaulting the fence.

Schmucky is the biggest whoremaster going when it comes to him and a tv camera. He would never show up anywhere unless there were cameras to catch his mug for a story.

But the wait for border crossing at the checkpoints is now four times as long because sequester.

Time for a resurrection of The Minuteman Project!

Okay. Stop giving the money away.

In any case, it is a very poor idea to respond to government failure with a call for more government.