North Korea announced Saturday that it has entered a state of war against South Korea. In a special statement, the North said it will deal with every inter-Korean issue in a wartime manner.

Therefore Zero Hedge is running the obligatory caption contest with this gem: 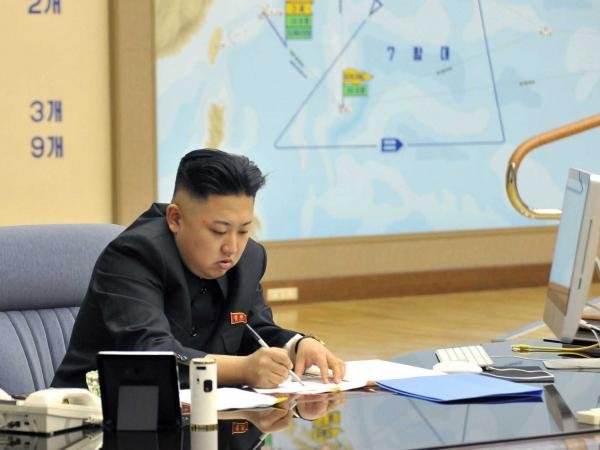 • "...and the last nuke is for Florida Gulf Coast University for busting my NCAA bracket."
• "Why would I want billions, when I can have millions? How do you spell 'War'?"
• "For the love of God, where's Rodman?"

• "Anyone notice the iMac on his desk!? Long live Jobs!"
• "...and clam chowder, and a large bowl of chili con carne, and a side order of bacon, with sour cream, and cream-filled doughnuts, ice cream with marshmallow topping, and chocolate syrup, and..."
• "Wasn't he the guy that made that Gangnam Style video?"

• "Dear Un, if you are going to take a shot, aim at the District of Criminals."
• "Hory shit! According to my carcurations, I rost f---ing errything in Cyprus! Damn you, Deeser-broom!!! Damn you straight to herr!!!"
• Is that a Bic pen he is using to plot the overthrow of western civilization?

• "Dear Pen Pal, I was so happy to get your letter. I have just returned home from a trip to threaten the world powers. I am 30 years old and have worked really hard to destabilize the region. It has been very difficult to carry on ever since my father died..."
• "Dear Steve, My dogs and I were working on this new nuke project plan, but every time I try the save on iCloud, I get 'Server not found - check your internet connection'. What is going on? Also what is this yellow cable for? Un"

• "Hmmm... So I can save money if I use FedEx"
• "It took me like three hours to finish the shading on your upper lip. It's probably the best drawing I've ever done."
• "Let's see ... they have three longbowmen to my two horse archers. They get additional strength for city defense. I'm going to need the war elephants."

I've given up my goal of ruling a country just because of him!

Obama has Eric Holder, but my new hot shot will be Geoffrey Holder who is pushing the Un cola. Take that Mayor Bloomberg and your "Big Gulp".
http://www.youtube.com/watch?v=JinBKqSCSac&sns=em

Anyone see this differing from the DNC?
**************************
ECONOMICS
The Socialist Party stands for a fundamental transformation of the economy, focusing on production for need not profit. So-called fair trade is meaningless as long as the world economy is dominated by a few massive corporations. Only a global transformation from capitalism to democratic socialism will provide the conditions for international peace, justice, and economic cooperation based on the large-scale transfer of resources and technology from the developed to the developing countries.
* We demand the immediate withdrawal of the United States from the North American Free Trade Agreement (NAFTA) and the Central American Free Trade Agreement (CAFTA), and oppose the creation of a widened Free Trade Area of the Americas (FTAA).
* We call for worker and community ownership and control of corporations within the framework of a decentralized and democratically determined economic plan.
* We call for a minimum wage of $15 per hour, indexed to the cost of living.
* We call for a full employment policy. We support the provision of a livable guaranteed annual income.
* We call for all financial and insurance institutions to be socially owned and operated by a democratically-controlled national banking authority, which should include credit unions, mutual insurance cooperatives, and cooperative state banks. In the meantime, we call for re-regulation of the banking and insurance industries.
* We call for a steeply graduated income tax and a steeply graduated estate tax, and a maximum income of no more than ten times the minimum. We oppose regressive taxes such as payroll tax, sales tax, and property taxes.
* We call for the restoration of the capital gains tax and luxury tax on a progressive, graduated scale.
* We call for compensation to communities-- and compensation, re-training, and other support service for workers-- affected by plant and military base closings as stop-gap measures until we reach our goal of creating a socialist society totally separate from the global capitalist economy.
* We oppose the International Monetary Fund, the World Bank, and the World Trade Organization as instruments of capitalist oppression throughout the world.
* We demand cancellation of Third World debt.
* We call for a National Pension Authority to hold the assets of private pension funds, and a levy against corporate assets for any pension fund deficits.
* We call for increased and expanded welfare assistance and increased and expanded unemployment compensation at 100% of a worker's previous income or the minimum wage, whichever is higher, for the full period of unemployment or re-training, whichever is longer.
* We support a program of massive federal investment in both urban and rural areas for infrastructure reconstruction and economic development.
* We support tax benefits for renters equal to those for homeowners.
* We call for the elimination of subsidies and tax breaks that benefit corporations and all other forms of corporate welfare.
* We oppose the court-created precedent of “corporate personhood” that illegitimately gives corporations rights that were intended for human beings