A township in Michigan thinks it can restrict certain kinds of signs.

A cattle farmer is fighting a Gaines Township zoning ordinance to keep a couple of trailer-sized political signs on his property.

A crowd is expected in 63rd District Court Friday as Vern Verduin takes on Township officials who are trying to force him to remove his signs[, which] are visible from M-6, are posted on two semi-truck trailers parked in Verduin's pasture. 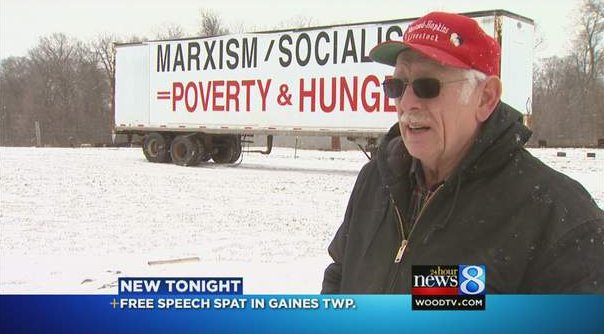 "I felt that things were going in the wrong direction," he said... [and] as a farmer, he's concerned especially about hunger and poverty... But the signs have put him at odds with the leaders of Gaines Township, for whom he has worked as a volunteer firefighter for years.

The Township cited him for violating its sign ordinance, which restricts the size of political signs to 20 square feet... But under the ordinance, you can have a bigger sign to sell a product than to sell an idea.

"You can have a 32-foot advertising sign. I don't get that," said Verduin... That commercial element is why Verduin's lawyer thinks his client will win in court. The US Constitution, he says, gives political speech more protection than it does commercial speech.

...Verduin said he could have avoided the fight but has been encouraged by the response he said he has received from people who have driven by and seen his signs- -- especially those from countries where free speech is limited... "One guy gives me a big ol' bear hug. You know, used broken English. So that helped me continue on," he said.

I'd like to think Verduin would win the case in a default judgment, but since we're living in a post-Constitutional Republic (thanks, Chief Justice Roberts!), one never knows.

Just make "Marxism/Socialism = Poverty & hunger" the name of your company.