Hillary has become a spook’s candidate. Former deputy CIA Director Michael Morell, who so conveniently covered her tracks in Benghazi, has now confirmed it.

In a glowing endorsement his friends at The New York Times prominently featured Friday, Morell gave his full-throated support to Clinton, while insisting that he was no partisan and had even voted Republican in the past.

Like an obedient party hack vying for a new job, Morell spouted the party line that Donald Trump was “not only unqualified for the job, but he may well pose a threat to our national security.”

Those are strong words, especially coming from someone who we are led to believe is an unimpeachable source. But is he?

The “non-partisan” Morell was caught “mis-speaking” to Congress about his role in sanitizing the infamous CIA talking points prepared for US Ambassador Susan Rice to deliver on the Sunday talk shows after the Benghazi attacks. And when he was caught out, like a faithful soldier, he fell on his sword.

Here’s how it happened: After Susan Rice’s outlandish claims on the Sunday talk shows that the Benghazi attacks began as a spontaneous protest over a “hateful” YouTube video, Congress began asking where she had gotten that information. This is how lawmakers discovered that the intelligence community had drafted her talking points, with input from the White House and Hillary Clinton’s staff. 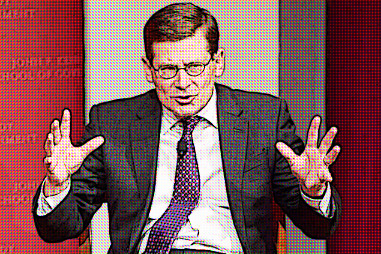 Early drafts of the talking points included a mention of al Qaeda. But that reference was removed in the final drafts. Sen. Lindsay Graham explained to me what happened next.

“On Nov. 27, 2012, Morell and Susan Rice came into my office,” he told me. “I asked Morell who changed [the talking points]. He said, the FBI deleted the reference to al Qaeda because of an ongoing criminal investigation. So I called the FBI. They said, no, they didn’t change the talking points. They were furious.”

Apparently, that was an understatement: Someone at a senior level at FBI called the CIA to protest directly. Graham continued the story: “At 4 p.m. that day, CIA called me and said Morell ‘mis-spoke’ in his meeting with me, and that CIA deleted [the reference to al Qaeda], but they couldn’t give a reason why.”

Graham thought the reason was obvious: “If the truth had been known that al Qaeda killed four Americans seven weeks before an election, it would have been a different political story.”

Remember what Obama and his surrogates were saying? “Osama is dead, GM is alive.” That was their campaign mantra.

In fact, it was Morell himself who made those changes.

Morell subsequently testified before the House Select Committee on Intelligence, and eventually before the Benghazi Select Committee, twisting himself into a pretzel to explain why he removed any mention of the al Qaeda involvement in the attacks.

He ultimately claimed he believed news reports calling the Benghazi attacks a protest gone wild were more credible than repeated e-mails and cables from his own station chief in Libya insisting there had never been a protest.

It was an admission of gross incompetence — or partisanship. But that was the party line Clinton was putting out.

Morell was rewarded after the 2012 election. When he retired from CIA, Morell took a position with Beacon Global Strategies, a company cofounded by Andrew Shapiro and Philippe Reines, members of Hillary Clinton’s inner circle at the State Department.

In his Times op-ed, Morell claims Donald Trump is an “unwitting agent” of Russia because he makes friendly remarks toward Putin. But Trump has never taken a dime from Putin. As we now know, Clinton and her husband have both profited handsomely from their relations to Russian state-owned banks and corporations — and actually helped Russia get its hands on a company with rights to a fifth of US uranium. Does that make her a “witting agent” of Russia?

This former spook’s willingness to skewer the truth on behalf of a political patron should suffice to make any thinking person reject his judgment.

As for the truth about Hillary, well, we’ve seen her selling political favors to foreign countries and companies while secretary of state through the Clinton Foundation. And lying to the public incessantly — about Benghazi, her e-mails, you name it. Just imagine what she’ll do if elected president.

Kenneth R. Timmerman’s latest book, Deception: the Making of the YouTube Video Hillary and Obama Blamed for Benghazi, was released two weeks ago and is already in its 4th printing.

Examine his partners at Beacon Global Strategies where he now works. Obama and Clinton employees at one time

Timmerman is an old hand, I read two of his books, "Shadow Warriors" and another about Iran's duplicitousness. You can bank on what he says here. The Iranians hate him big time. Shadow Warriors is about how Democratic hacks at State undermined the Iraqi occupation. The Military had plans to place Iraqi ex-patriots living abroad in key government positions, keep the Army and some Bathe officials to govern, then get out quick. Instead Bremmer, and the State Department's political hacks, disbanded the army and did the de baathification, and put their own Iraqi hacks in place leading to all the trouble. When elections were finally held, most the ex-patriots the US Army wanted to install won. The commie left in this country are going to be the death of us all, Obozo, Hilldabest the whole lot.