CHART OF THE DAY: College Inflation Since 1978

Courtesy of David Stockman, here's another testament to government intervention:

It all goes back to two well-intentioned federal goals: first, that a college education should be within the reach of every American, and second, that if students borrow money from the federal government, they should repay it. Most of us would agree that both are noble goals. But the consequences of both have been stunning.

As a result of the first, the money began to flow; over the last 30 years, inflation-adjusted federal financial aid has quadrupled. Total student debt has now reached the $1 trillion mark, more than the credit card debt of every American combined. The federal deficit in the recently ended fiscal year totaled $1.3 trillion; the debt load carried by college grads now stands at more than two thirds of our nation's massive budget shortfall.

The above paragraph was actually written five years ago. The actual numbers are far worse today. 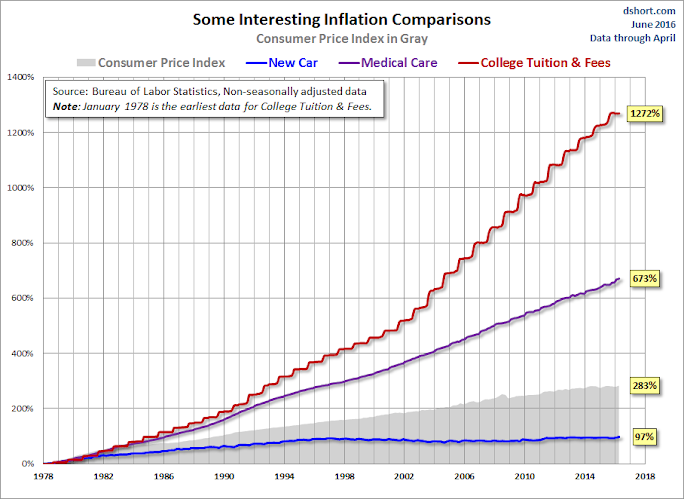 Look at the bright side: it's only 1,272 percent inflation in the last 38 years.

And--listen carefully people--students are responsible for any student loan debt they incur even if they decide to drop out six weeks into their first semester or three years after they matriculate. Based on anecdotal information from friends who are currently college professors and deans, many students--particularly those who come from a limited economic background--believe they are only responsible for paying back their student loan debt if they graduate. The actual truth is somewhat harsher and comes as a great shock to those who decide to drop out for whatever reason. Dare I try to shatter the myth that college is for everyone? The reality of that statement is becoming a very expensive lesson for some to learn. Best, Dr. Bill