Do you want to wear a Gadsden Flag symbol to work? You know, the one with coiled rattlesnake bearing the logo “Don’t Treat On Me”? Well, you’re a raaaaacist, via Eugene Volokh:

The Equal Employment Opportunity Commission, among its other functions, decides “hostile work environment” harassment claims brought against federal agencies. In doing so, it applies the same legal rules that courts apply to private employers, and that the EEOC follows in deciding whether to sue private employers. The EEOC has already ruled that coworkers’ wearing Confederate flag T-shirts can be punishable harassment (a decision that I think is incorrect); and, unsurprisingly, this is extending to other political speech as well. Here’s an excerpt from Shelton D. [pseudonym] v. Brennan, 2016 WL 3361228, decided by the EEOC two months ago:

I’ll leave it to you to hit the link for the excerpt of the ruling, and note a few things from Mr. Volokh: 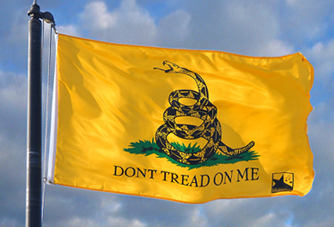 2. Nothing in the opinion suggests that the cap wearer said anything racist to Shelton D.; I’ve read many such EEOC decisions, and they generally list all the significant allegations of harassment. (I can’t access the specific complaint in the case, because all that information is kept secret in EEOC proceedings.) Shelton D.’s objection was apparently just to the wearing of the flag, and the ideology that he thinks has become associated with the flag. And the claim that the EEOC is allowing to go forward is simply that the cap, in some social or workplace “context” would be reasonably seen as conveying a racially offensive message.

He goes on to note that private employers would feel pressured to restrict this kind of thing under pain of lawsuit and government investigation. And he’s utterly correct. This could apply even to an employee vehicle in the parking lot, or if the hat was removed before entering the workplace. He further discusses people getting upset and complaining if someone has Trump/Pence gear, which would drive liberals nuts.

Really, most contentious stuff should be left out of the workplace, not due to government pressure, but in order to have a more unified, smoother running workplace. But, people are people, and will discuss things. It is interesting to note that it’s pretty much only liberals that will complain, though. Perhaps it’s time for Republicans to complain about all the Democrat material in the workplace. Think the EEOC will rule in favor of removing Black Lives Matter stuff, or Hillary for President?

Regardless, this ruling chills free speech, because companies will want to crack down on anything they see to avoid issues.

REad more at The Pirate's Cove.

You can fly a confederate flag all day long in Tennessee. I have one in my front yard on a 35 foot flag pole. That sh-t doesn't work in the South.

This so called commission does not make law. nor can they enforce any of the bullshit they espouse as law. They are just another Alphabet agency that the liberals have sicced on conservatives. Fight back Damn it!

We have no Rule of Law anymore. Our phony president does whatever he pleases and his attitude is, "to hell with the Constitution."

That filters down through all the appointed "judges" who are picked because they get the results that the elites want, not because they apply the law fairly and without bias.

I will continue to apply the 1st Amendment guaranteed freedom to my speech, though it may land me in jail. Far as I'm concerned, there is no such thing as 'hate' speech; my speech may offend you, if it does I recommend earplugs or just going away; this entire country is a free speech zone! If you want 'hate' speech laws, move to Saudi Arabia, they've got plenty of them.

One phrase you don't hear much these days is, "Well, it's a free country, ain't it." Time to make that statement true again!