ISIS BROADCASTS TO THE WORLD WHY IT KILLS: Protip - It's Islam

ISIS is taking umbrage at critics who challenge its claim to represent true Islam. In the latest issue of its magazine Dabiq, published on July 31, the author of an editorial entitled “Why We Hate You and Why We Fight You” repudiated “the Islam-is-a-peaceful-religion crowd.” That crowd would include President Obama, Hillary Clinton, Pope Francis and other world leaders, politicians and opinion makers who have pushed the narrative that ISIS is a deviant cult made up of violent extremists whose acts of terrorism have nothing to do with Islam. To the contrary, claimed the author of the Dabiq piece, “jihad and the laws of the Shari’ah   – as well as everything else deemed taboo by the Islam-is-a-peaceful-religion crowd – are in fact completely Islamic.”

In another article by an unnamed American convert living in ISIS territory, from which the Middle East Media Research Institute (MEMRI) quoted, the author addressed other converts living in the United States as to the true meaning of Islam:

"Now that you have found the truth of your Lord and abandoned the misguided paths of Satan, beware of the widespread disease of riddah (apostasy). Would you so quickly be ungrateful of Allah's guidance by retreating to deviance, even if under the mere guise of Islam?... Remember that Allah did not order you to adhere to any group except that of the single Muslim nation, and... forbade you to divide by making and join­ing other groups... [and] That one nation is the group following the Quran and the Sunnah, with allegiance to one leader, the Caliph of the Muslims...

"Do you not see the many so-called 'imams' and 'scholars' calling to alliances against Islam with the disbelievers, to maintaining the Muslim nation's separation by imaginary borders, and to rejecting the re­establishment of the Caliphate, which many of the earlier scholars called 'the most important of obliga­tions?!' Are these imams not 'of our skin and our language,' yet call to what would inevitably lead to our doom? Indeed, they are callers to the gates of Hell, so beware and do not be fooled by them. So reject these calls to disunity and come together. Live the life of Islam, for which you have already left the path of falsehood, and do not die the death of Jahiliyyah [the pre-Islamic period], a time in which there was no united Muslim nation having pledged allegiance to a single imam and thus having no obedience to a rightful authority." 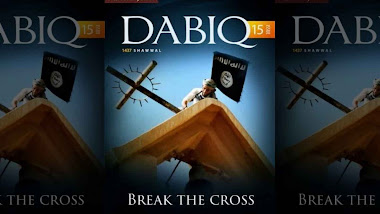 The ISIS author called upon the converts he was addressing to either “make hijra to Islamic State territory” or at least pledge allegiance to “the Caliph” Al-Baghdadi and “attack the disbelievers back home.” He urged those planning an attack in the West against the “Crusader nations and their citizens in their homelands” to “cause the most damage and panic, bringing death and injury to the enemy of Allah, the disbelievers.”

The author proceeded to quote from the Koran to support his case: "And make no mistake, for 'verily the disbelievers are a clear enemy to you' [Koran 4:101]

ISIS is not only tech savvy. It is marketing savvy, working hard to preserve its brand of true Islam from those infidels and “apostate ‘Imams’ in the West” who dare to challenge it.

Barack Obama, who claims that Donald Trump is unfit to be president and commander-in-chief, should not be the one casting any stones. Obama’s complete misreading of ISIS’s growing strength, which he allowed to happen in the first place as a consequence of his precipitous withdrawal of all U.S. combat troops from Iraq, proved that it was Obama who was unfit for the highest office in the land. He compounded his failure to nip the ISIS threat in the bud by completely discounting the source of its determination to fight to the death of every last jihadist – ISIS’s ideological roots in traditional Islam.

Once Prophet Muhammad emerged victorious over his enemies, he made Islam into a religion based on supremacism, war and conquest over non-believers wherever they can be found. ISIS’s literal reading of sharia law, which is based on the Koran and the sayings and actions of Prophet Muhammad, is closer to traditional Islam than the fanciful version of “Islam-is-a-peaceful-religion,” propagated by Obama, Pope Francis and the Islamists’ other apologists.

Ironically, it was President Obama, who at the outset of his first term in effect legitimized the brand of traditional Islam on which ISIS’s ideology is based, whether he meant to or not. Saudi Arabia is home to Islam’s two holiest sites in Mecca and Medina. It is also home to Wahhabism, the supremacist Islamic ideology based on a literalist reading of sharia law that ISIS shares.  During a visit to Saudi Arabia, on the eve of his speech to the Muslim world in Cairo, Egypt in June 2009, Obama told reporters "I thought it was very important to come to the place where Islam began.” Islam began the same way ISIS is carrying out its literalist dogma today – a religion built on jihadist conquests to subdue disbelievers and make Allah’s rule supreme in the world.

This “beacon of Islamic learning” decided it was inappropriate to condemn ISIS as un-Islamic. “Al Azhar will not judge ISIS or its Islam as un-Islamic, for it is not its right, neither concerning ISIS nor anyone else,” said an Al-Azhar spokesman, Abbas Showman.

Sheikh Muhammad Abdullah Nasr, a graduate of al-Azhar University who is a scholar in Islamic law, explained that Al-Azhar cannot condemn ISIS as un-Islamic because it is “a byproduct of Al Azhar's programs.” The Al-Azhar University graduate added, “Al Azhar says there must be a caliphate and that it is an obligation for the Muslim world [to establish it]. Al Azhar teaches the law of apostasy and killing the apostate. Al Azhar is hostile towards religious minorities, and teaches things like not building churches, etc. Al Azhar upholds the institution of jizya [extracting tribute from religious minorities]. Al Azhar teaches stoning people. So can Al Azhar denounce itself as un-Islamic?”

This is not just the complaint of a disgruntled university graduate. Indeed, Obama’s “beacon of Islamic learning” teaches Islamic law in a way that ISIS would have little problem with.  For example, Ahmad Al-Tayyeb, the Sheikh of Al-Azhar, said this past June (as quoted by MEMRI) that “the concepts of human rights are full of ticking time bombs” and that “apostasy is a crime” punishable by death if the apostate does not repent.

Al-Azhar University has a female professor of doctrine, Suad Saleh, who has justified the enslavement and rape of non-Muslim women captured in war. “Islam says that a woman is either a wife or a slave girl. Legitimately owned slaves come from among prisoners from a war,” she explained. After all, the “light of learning” this professor is carrying to justify such mistreatment of infidel female captives shines on the Koran itself (4:3). Cautioning not to go beyond what the Koran permits, she represents that “beacon of Islamic learning, Al-Azhar, in “paving the way” (to quote Obama) for ISIS’s actions against women.

In short, ISIS in a very real sense represents Islam in its original literal form, using a blend of archaic barbarism and 21st century technology to continue Prophet Muhammad’s legacy as jihad.warrior.

This Video Will Get Donald Trump Elected