FUNNIEST CHART THIS YEAR: Illinois Obamacare Premiums to Skyrocket up to... 90%

The hits just keep on coming in the deep blue state of Illinois.

There are the public sector union pension plans, which are simply bankrupting the state.

There are the ever-increasing property, income and sales taxes.

Oh. And then there's the ultimate irony: the health care system in the state that gave us Barack Obama is going to be -- yes, you guessed it -- financially eviscerated: 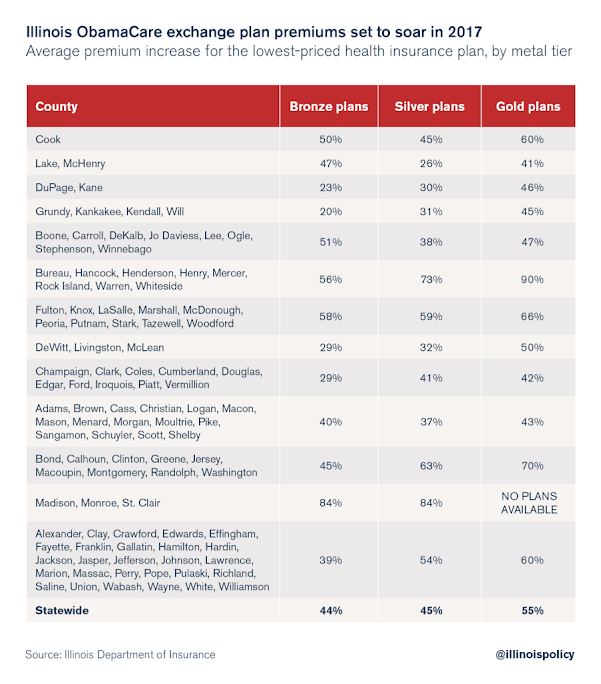 ...If skyrocketing premiums weren’t bad enough, tens of thousands of Illinoisans will also see their plans canceled at the end of the year. UnitedHealthcare and Aetna, two of the three largest insurers in the country, previously announced they were pulling out of Illinois’ ObamaCare exchange altogether. And even the insurers who are staying are canceling many of their existing offerings. Notices for these cancellations will go out in fall 2016.

Come to think of it, this little economic "turbulence" couldn't happen to a nicer bunch of statists.

I am truly curious about this... if there are no providers, meaning literally no way to get insurance... do you still have to pay the fine? Oh, I'm betting one way, but it might go either way. I would absolutely adore it if it goes the way I think. Especially knowing that many who are in the program voted for it. Absolutely love to hope it goes as I think.

"... if there are no providers, meaning literally no way to get insurance... do you still have to pay the fine?No. There is a long list of "hardships" that will excuse you from paying the fine. The list is so vague that anyone would be a fool to pay the fine.

Urhm, right, but many would be a fool to vote for people who would write such a law. Thanks, though.