Huma Abedin has announced that she is separating from the husband, Carlos Danger. Carlos Danger was caught tweeting photos of his crotch with a child next to him. So Huma says that's enough.

Did Huma Abedin Weiner really not know she had a deviant taking care of her child? She may not know what's best for herself, but she apparently knows what's best for Hillary Clinton. I mean, she's in line, she's chief aide now. She's presumably gonna be Hillary's chief of staff. But she has not been chief of her husband's staff, obviously.

It's interesting to note this, too. Did Hillary try to talk her into staying? Hillary didn't do this. Hillary hung in there. But Huma has had enough. Huma has chosen Hillary over Weiner. Obviously in more ways than one.

I mean, the idea, the possibility of becoming Hillary's chief of staff is obviously a very attractive thing, particularly when Huma has not been chief of her husband's staff, obviously, for quite a while.

But the contrast here, no bimbo eruption unit here. Huma Abedin not arising and trying to find out who these women are texting with her husband and then trying to destroy them.

But Huma, I guess she just doesn't want to deal with it, doesn't want to put up with it. And they're very sad in the Drive-By Media. It's almost fly the flag at half mast day. Jeff Zeleny, CNN, just a moment ago:

ZELENY: He is more than a spouse. He is a central player, of course, to Huma Abedin, though. But one cannot understate the importance of her to the Hillary Clinton campaign. There is no one who is --

ZELENY: -- at the candidate's right hand more often than Huma Abedin. This really is a personal matter, not a campaign matter; but it is really angering some people on the campaign I have spoken to this morning when this New York Post report came out. They were hoping that he would not embarrass this campaign, embarrass Huma. But that is what has happened here. But, you know, there are so many aides and so many people who work on a campaign; but, again, no one closer in every respect to Secretary Clinton than Huma Abedin. One can only imagine the personal conversations that Huma Abedin is having with Hillary Clinton... 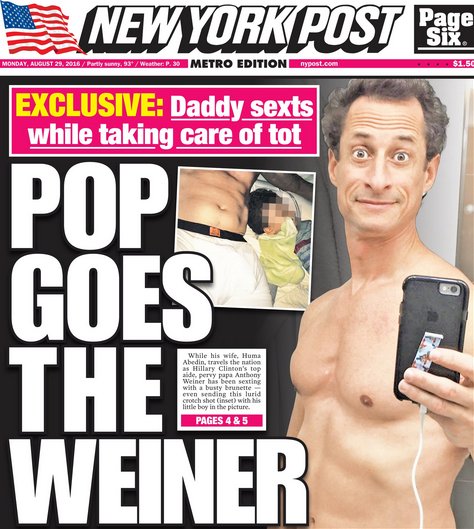 I wonder if Jeff Zeleny there understands what he really just said when he says, "One can only imagine the personal conversations that" -- what does Huma have in common with Hillary? What in the world could this possibly be about? It's obvious. Horndog husbands. So they all know, they all obviously know, but Huma has chosen a different route. She's distancing herself and separating herself. I guess she figured there's no future in the last name being Weiner, whereas Hillary knew there was a future with the last name being Clinton. Here is Brian Stelter, the media whiz at CNN.

STELTER: It's perplexing, it's mystifying, and now just downright sad. People have had fun with this story, they've exploited this story. The New York Post, among others, certainly have. But now to have a child involved, have a child on the cover of the New York Post with his father in bed with him taking lewd photos, that is just sad.

Most ironic twist here is that Hillary reportedly wants Huma to be her chief of staff.

It was never a real marriage, it was a "marriage of state."

Abedin (who has never gone by the name "Mrs. Weiner") is representing the Muslim Brotherhood, and is of course a Muslim; Weiner is a Jew. Yeah, sure, it's loooove. Not.

It's no wonder Weiner wants some buns with plenty of BBQ sauce, he probably never gets to see his "wife" naked, let alone play hide-the-hot-dog; besides, Huma is busy keeping Hillary happy, so that she can be the power behind the throne (like another Muslim is for Obozo now.)

Everything about these evil people is a lie; everything they do and say is deceitful. They do not know love, or honor, or God.