The University of Chicago has awarded an illegal immigrant nearly $300,000 in scholarships to attend the prestigious private institution in the fall.

David Rodriguez (a pseudonym used for security purposes) fled to America from Mexico with his family when he was five years old, eventually settling in Tennessee—a state notoriously opposed to open-border immigration policies.

Accordingly, Rodriguez was rendered ineligible for in-state tuition costs, but was able to apply for certain scholarships in other states under the Obama administration’s Deferred Action for Childhood Arrivals (DACA), which grants students from illegal immigrant families temporary visas to remain in America for college.

Now, Rodriguez plans to attend the University of Chicago after the school awarded him $290,872 in scholarship funds, The Chattanooga Times Free Press reports, noting that the financial assistance makes it cheaper for Rodriguez to attend UC than a Tennessee community college. 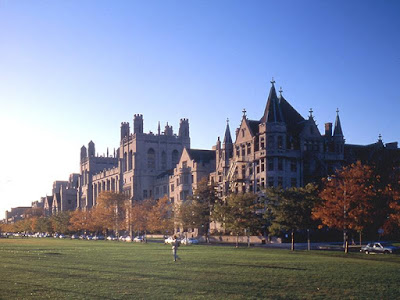 “I became active in Black Lives Matter two years ago, became an LGBT rights activist, campaigned for Bernie Sanders,” Rodriguez told The Times Free Press, explaining his qualifications for the scholarship. “I had the GPA, test scores, and activities that could get me into a good college.”

Notably, UC’s annual tuition rate is set at $71,559, totaling $286,236 for four years, meaning Rodriguez has been awarded more than a full ride to the school.

Nonetheless, Rodriguez’s friends have apparently launched a GoFundMe page for Rodriguez with a fundraising goal of $2,500 to cover miscellaneous living expenses.

Rodriguez told The Times Free Press that he hopes to become a human rights lawyer and eventually return to Tennessee, a state that has sued the Obama Administration over the unconstitutionality of DACA.

Some Republican lawmakers in the state, however, drafted a recent bill that would have allowed roughly 8,000 illegal immigrants who meet specified criteria pay in-state college tuition, though it failed to pass in the latest legislative session.

“I did it because it’s the fair and just thing to do, and I believe these kids will have a huge beneficial impact on Tennessee’s economy if they go to college here,” explained Rep. Todd Gardenhire (R), a cosponsor of the bill. “They are among the best and brightest, and we’re losing a young man like David to a college in another state. They’re great students, perfect citizens, and pay the same sales taxes the rest of us do.”

In New Jersey, for instance, in-state tuition is already afforded to illegal immigrants, yet some Democratic lawmakers still introduced a bill in January that would allot $7 million of state financial aid to illegal immigrants. Meanwhile, an even grander scheme geared toward the children of illegal immigrants in California has gone underutilized due to parental concerns about disclosing tax information.

“DACA is a government benefits program that unilaterally extends work permits, Social Security, Medicare, and cash tax benefits to people illegally in the country,” the Trump campaign told The Times Free Press. “Mr. Trump has been clear that any immigration plan he supports must improve jobs and wages for Americans, including the tens of millions of Americans out of work.”

Like the GOP, the Supreme Court is also split on the issue, with a recent vote on Obama’s executive action deportation deferrals ending with a 4-4 deadlock, effectively kicking the vote down the road until the vacant seat is filled.